Capt. Dan McCarthy’s Moana III has been doing some holiday work out of the “Rock” (Lizard Island) and before returning to Cairns yesterday reported still the odd marlin around including a 300lb blue and 300lb black. I also heard via Ray off an encounter of a big black off (wide of) Innisfail/Mission Beach a couple of days ago – one of two raised including a smaller fish. There are still a few around.

Meanwhile in the same area, Andrew Tivey had a friend Warren Raisin visiting from Brisbane over the New Year and got out in the little pocket rocket Hook-In for a bit of light tackle fun on Saturday fishing wide from Finn to Hope reefs along with son Ryan.

Warren started his New Year (and billfish career!) with a stonker sail that Andrew called for a 100lber! He followed it up later in the day with another smaller sail [pictured] also found him a nice mackeral and dollie as well. Ryan also had his first day on the leader and had a ball wrestling some feisty sailfish. Andrew said that he didn’t have to do much at all except drive clear the lines and laugh at Warren Squealing ;-)

Cairns regular on the blog fishing out of her boat Think Big Sharon Poulter made the local news today with a potential record dolphin fish. Congrats Sharon!

And down out of the Whitsunday’s Marlene Hicks sent through the pic below of the first fish for 2016 on board Topless, a nice little black caught in the islands on the 2nd of January. It was a first billfish for angler Andrea Hulands – congrats Andrea – as well as the first female angler/decky combo onboard Topless though surely not the last! 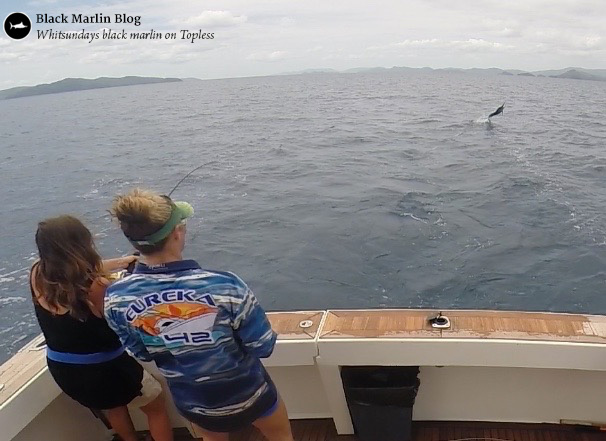