Some reports from all over, over the 4 day Aussie Day ‘long’ weekend :-) Hope everyone had a great day!

Capt. Ross McCubbin on Lucky Strike went 2-2-1 on Monday with mate David Wright getting his first blue at approx 160kg. Ross said the fishing was steady with boats getting few shots each. Capt. Craig “Sparra” Denhim’s Hot Shot likewise on Monday went 2 for 0 on blues, 1 for 0 blacks, 1 for 1 stripes for a chance at the full spectrum of the GC slam. 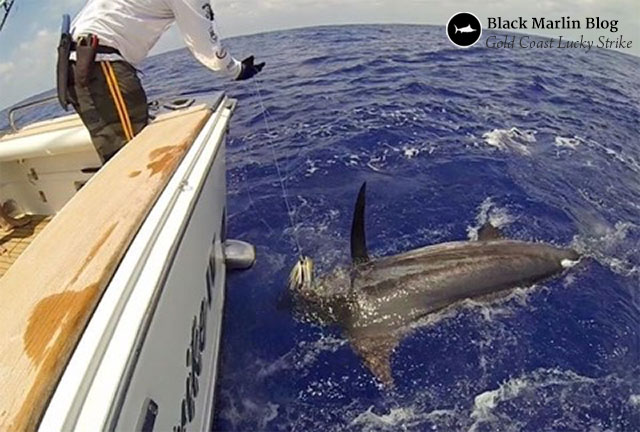 Simon Herbert also had a good day on the Gold Coast yesterday. Fishing in his boat SASSA1 (7.4m Trophy Pro) with Capt Herbie in charge went 2-2-2 on a blue marlin and this nice yellowfin (below) which went 70kg. They were fishing east of the sea way in 300m of water and 28 degree water.  What a cracking yellowfin! 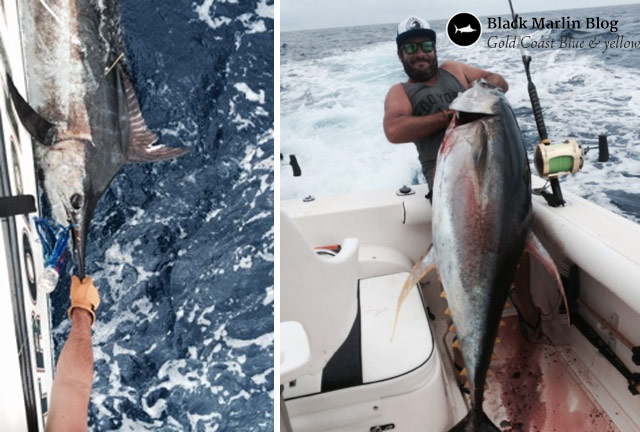 Rob Lang on Black N Blue reports that the fishing has slowed somewhat off Coffs but there is still a few little black marlin around, mainly biting on the tide change. On Black N Blue on Monday they went 3-2-2 and then followed up yesterday with a 3-3-2. Rob says there are also quite a few dolphinfish, wahoo and small yellowfin around as well.

Summer 2015/16 the summer of the sails? They continue to show up in more unsual places down the coast including onto Port Stephens.  Jason Smith tells me that his daughter Abbey was fishing for her first billfish on Newcastle & Port Stephens Game Club boat RACKEM UP, skippered by her dad on the Australia Day weekend, and had a double hookup on sailfish, landing both therefore Abbey getting her first billfish.

Luke Maddern from MADDNESS, a 40 ft Caribbean from Botany Bay GFC tells me they notched up the Champion Boat T&R with 3 marlin on 15kg. They were closely followed by Compton from Lake Macquarie and 3rd place Gale Force (SGFC) and 4th CT from Botany Bay GFC.

Luke said that it was a close competition in Saturday’s very trying conditions!