What a weekend to be fishing off Bermi with a couple of double figure days for boats on the hot spot!

Nathan Brown’s Head Hunter with 10 conversions from 11 strike yesterday (9 stipes and one black marlin). Nathan says that after a 3-3-3 day on Tuesday, yesterday they found a nice bait ball where they released the black and a nice one (for the far south coast) of around 130kg as well as four striped marlin – the day was looking good!

Chosing to disappear from the main group of boats, they added to the tally but were still only at 5 fish for the day at 4pm.  Soon after the missed their only fish for the day on the switch, before finding the holy grail notching up another 5 fish in just a touch over an hour’s fishing. Although that put them traveling home at close to 8pm it was well worth it to say the least!

Nathan said they saw some of the most awesome surface action he’s witnessed with multiple fish on balls and some awesome bites right at the back of the boat.

Nathan said the bite at Bermagui has been excellent all week with plenty of boats getting multiple fish each day and hopefully to only get better as the month rolls on.

Another who has been on the fish over the past couple of weeks down there is Darren Buttigieg’s Happy Hour. Following up his tally from last week (prev reports) Darren had another big weekend on the water with 10 from 11 on Saturday as well – the 10th one for Darren’s 10 year old daughter Makayla and her very first marlin (though I’m sure it won’t be the last).
They followed up again yesterday with another 5 from 7 which makes 18 bites in 2 days – awesome fishing! 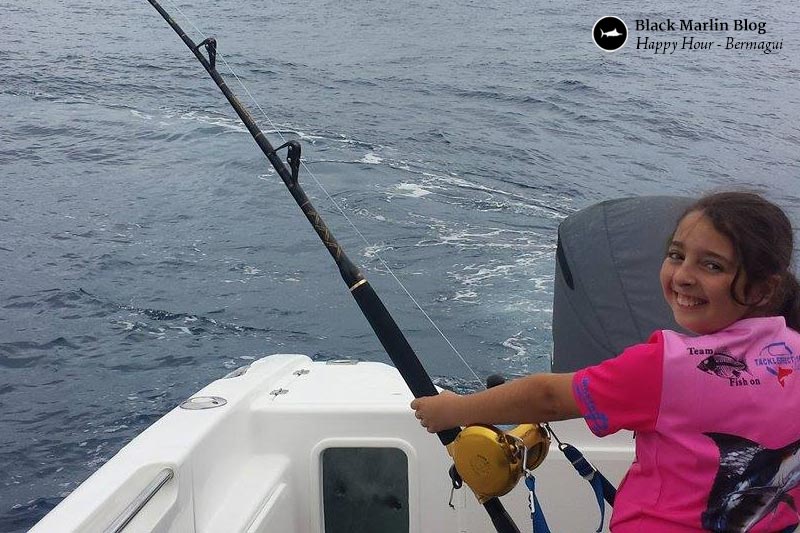 A great story from Brent Harding on board his boat Billistic yesterday fishing out of Port. Brent was fishing inshore off Port Stephens and within 10 minutes of hooking up, had an est. 40kg black marlin boatside for tag and release. Unfortunately the light leader broke off not much above the hook so they weren’t able to retrieve the hook…. yet.
Anyways, with the baits straight back in the water, Brent thinks they only made it about 50 metres before they were hooked up again. This ‘second’ fish, another black marlin comes out in a series of jumps. Funny enough, it looks very much like the one they just released. Turns out, it is! This time they were able to swim the fish on release (probably being a bit more tired this time!) and retrieve both of the circle hooks, which were in the corner of its mouth almost on top of each other! How’s that for a great release story!?!
Brent said they also had a few up that didn’t eat or just knocked the bait with no follow up.  He also said that one of the fish they got was one of the smallest he has caught down that way at just over the 10kg mark, but not by much. Other club boats also reported similar size fish.  Brent says he looks forward to hearing big numbers inshore this week with the bait stacking up and waters patchy but warm between 23 and 25 degrees.
Capt. Scotty Thorington’s (Haven Charters Terrigal) Freedom is still at Broken Bay, and will be up to port on Wednesday. Ben “Nosto” Bright says that the really nice water has pushed in close from there all the way up by sounds of it with plenty of fish in it. Blacks from 10-100 kg, stripes to 100 kg, heaps hammerheads and a few makos. On board Freedom they caught a 122cm black yesterday (in a day of 2 stripes, 2 blacks and 3 hammerheads) yet another of the very small variety. They’re already fishing today and already on the board!

Central Coast GFC’s VP Myles Weston also reports from the Central Coast that on his boat Elempi they released a black marlin yesterday for Louis, from Brazil which was his first marlin.

And back to the ‘catching your own released fish theme’ I heard that Port Hacking GFC’s Bruce Rayment on board his boat Avalon caught the second of his own previously tagged (one just a week earlier) dolphin fish over the weekend as well as a nice black 2m short. 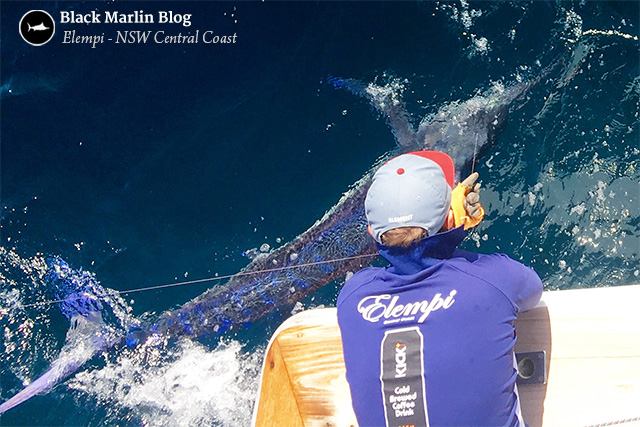