SEQ Tourneys and blues, Coffs and Interclub kicks off

It seems like someone hit the blue marlin button on the Gold Coast with a fair bit of action on the water over the last few days.  Glanville Heydenrych’s Mufasa Sport Fishing was one that went 4-4-2 blue marlin for first time angler.  Grant Thomson took the Kevlacat out (too rough to go surfing so go figure ;-)) and also converted two including the pic above for Steve Purcel – with the fish doing the typical blue marlin charge!

Grants tells me that Murphy’s Law also got a couple so definitely a few around.
And Rob Lang (Black N Blue) reports that they have also made their way to Coffs. He went 3-3-2 on Wednesday. If you follow (or especially if you don’t) follow Rob’s Facebook page, check out the mad footage of the fish, again charging the boat on the bite on this Coffs Coast SF page – he gets up to 14mph keeping in front of it!

This weekend the Interclub kicks off at Port Stephens and good luck to everyone fishing. I saw some more great fishing from Scotty Thorrington’s Freedom again on Wednesday with another 10 black marlin inshore.

And congratulations to the team on Garmin 1 who took home a swag of wins in the Garmin Little Ships tournament on the weekend (19/20 February) photo).

Skippered by Lance Ripley, Garmin 1 they accounted for 2 blues on Friday (Kristy and Mat) and a black to Mat on Friday also giving them Runner-up Champion Female to Kirsty Ripley and Champion Junior to Mat Dietrich.  They also won Champion Boat Under 8m and the Trevor Clark Interclub Shield.  Lance reports it was fantastic weather and a great tournament. 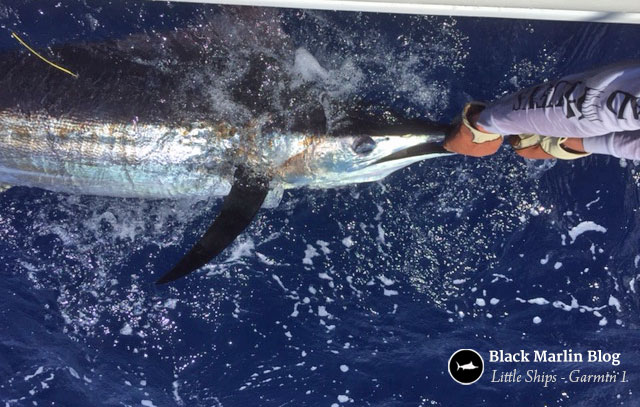