The trio Brett “Changa” Chain, Scott Lee and Darren Lewis have just finished a couple of days of fishing and targeting the swords off the South Coast on board Nothing Heard (21 Spearfish).  Changa tells me that the first day resulted in zeros so over dinner the discussed areas and looked SST and currents and decided that a 40nm was the place to be.

The next day, after a late start that involved a cooked breaky (hey, you need your strength!) and waiting for fuel they finally got on the water at 8:30am and put the first baits in 11:30am. It didn’t take long for the first bite which came within half an hour resulting in a 178kg sword for Changa after a one hour fight.

They ran back to their drift line and put the baits in again and were hooked up again within 10 mins!! This time it was a 2 hour fight resulting in a 218kg sword to Scotty.  They had the fish boat side and tagged however after trying to swim and revive she would not keep going unfortunately.

Headed home in after dark and were happy to see that both of their first 2 fish (going by current records) could have both been records on 37kg line.

Changa gives a massive shoutout and thanks to 3rd man Darren Lewis who has put a huge amount of time into sword fishing last 12 months as well as George Lirantzis for his help, and also Richard Abela for letting Changa chew his ear off in all regards to fishing for swords for God knows how long.

A dream come true for all! 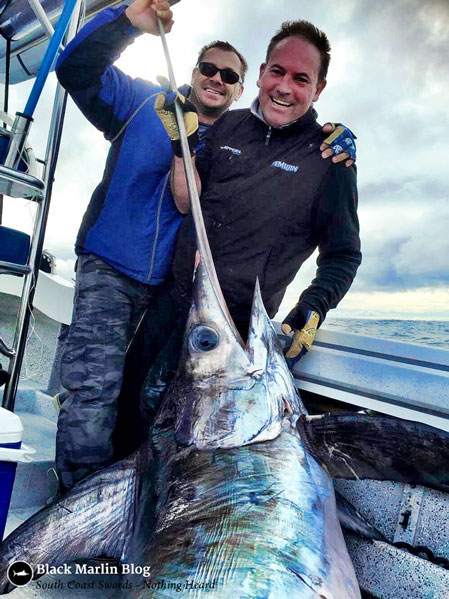