Capt. Chad Mill’s Blue Lightning is back at the Monte’s for their 2016 and will once again incorporate some billfishing into the weekly program. Leah tells me that on the trip up to Dampier they had some billfish action.

The first being not long after the spread went out at 4pm when the long rigger with the Pakula black soft head had a strike. Pete D took up the 37kg standup & reeled in the first bill fish for the trip and his first marlin, a blue weighing approx 120kg. This was soon followed by a second strike on the short rigger but with no conversion.

As the sun began to set they had another strike on the long rigger. This time it was young Brendan who took up the 37kg stand-up and hauled in his first marlin, a little black around 50kg. Once again the Pakula black soft head proving its worth.

The next day they hooked the first marlin for the day on the short rigger, this one Audi’s first blue, weighing around 160kgs, once again on the Pakula black soft head of the previous day’s conversions. It released showing off its colour.

Brendan, followed up with a sailfish on his Stella 30000 being the perfect finish to a superb trip north. 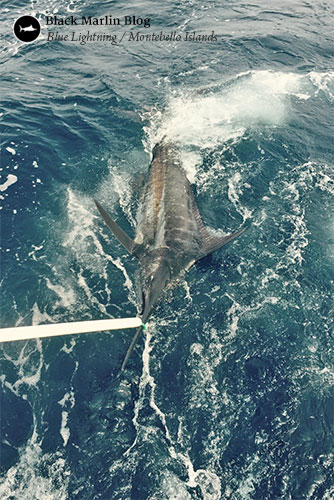