Cairns: Some more late season juvie black marlin action with Sharon and Paul Poulter’s Think Big (pictured) on Sunday.  They saw nothing on Saturday so started Sunday with a snorkel at Michaelmas Cay for a couple of hours before starting fishing. The soon had one micro model swimming along with the right rigger bait for a while but it wouldn’t eat. A  couple of hours later they had a bite on the 4kg bit it didn’t stick, then 30 mins later we had a good bite on the 6kg and hooked up and tagged in 30 mins.

Fraser: Sunshine Coast GFC’s Brendon Van Ras on Finatic tagged 5 blacks at Fraser on the weekend indicating there are still plenty around there!

Exmouth: GC’s Michael Umback is back from a long trip over WA with some observations for us east coasters! ;-) Michael says that boy what a windy place. (He towed his cross country over there.) They spent 6 weeks on Ningaloo Reef, 4 weeks at Exmouth and 2 weeks at Coral Bay with only 5 fishable days beakie fishing in the little boat. But Michael says that he has to agree the fishing is the next level when you can get out there.

As well as the stripe (below) he caught his biggest black marlin easy over 100kg, a sail, his biggest wahoo, mahi mahi, his biggest yellowfin and had lots of fun with the fly rod. 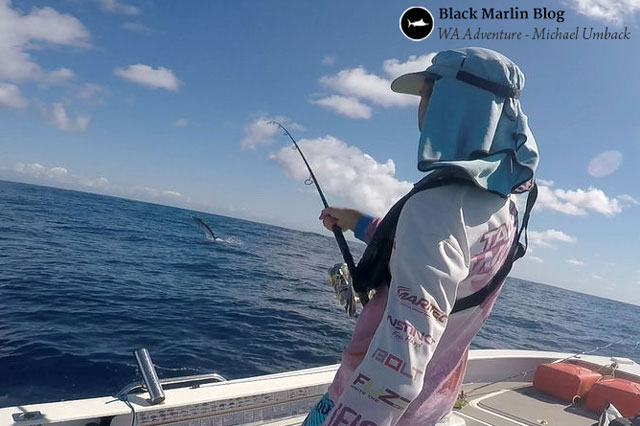