Quick out of the blocks again on Day 2 with a tag in the first 15 minutes of fishing was the Eggins family’s Athaldo with Capt. Alan “Tiger” Geale at the wheel, tagging a 200lb black marlin to angler Paul.  Surprising the fleet with yet many of whom are struggling to get on the board themselves, they tagged yet another soon after – this time for Josh – putting the team on three tags early.

South African angler Kevin on Capt. Darren “Biggles” Haydon’s Bounty Hunter was also on the board early with a fish that Biggs put at 175lbs.

Local private boat, and the faces behind Grander Sport Fishing Wear on the Bartlett’s Black Magic, were also on the board early with a fish at 175lbs for Victoria. They also followed up with a second fish late in the day for Amber that they put at 500lbs.

And never one to be counted out, after a slow day 1, Capt. Corey Hard’s Askari found themselves fishing in their own sponsored grid location, giving Corey the chance to sing “Your linen is our business” on his fishing reports which came in quick succession with three fish at 750, 150 and 250 to give Athaldo a nudge in the top spot.

Capt. Tim Richardson’s Tradition recorded a 600lb fish for Josh (photo) and Capt. Russell Guage put Rob Crane onto a 250lber on his Too Easy II just before cease fishing to round out the tags (10 for the day). Brett Creary’s Absolut was also hooked up at cease fishing so I will endevour to find out what happened there.

The current standings are: Athaldo with 3 tags leading on countback from Askari also with 3 tags. Black Magic is next with 2 tags. Followed by a 9 boat fleet on 1 tag a piece lead by Capt. Tim Dean’s Calypso who tagged the first fish of the comp on Day 1.

Update: Absolut unfortunately lost their fish they estimated at 800lbs after a 3 hour fight.

And outside the comp, and off Townsville, a report from John Herrod of an estimated 150lb black marlin to TGFC (Townsville) club boat Reef Rain on Sunday (below). 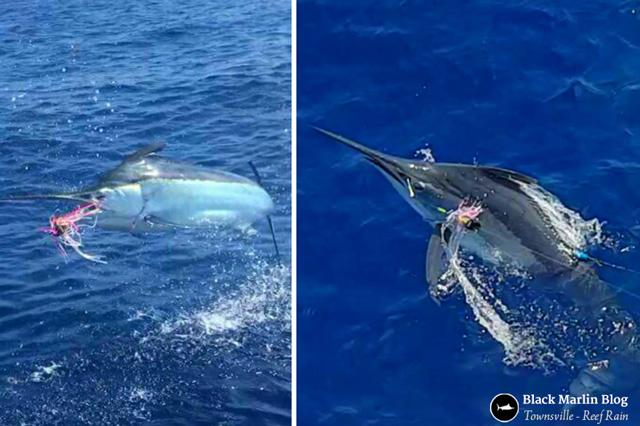