Well if you were following me on Twitter for the ‘as it happens’ fish tags, you’ll know that it was a long time between drinks on day 1.  But lets not talk about that yet, lets talk about the weather. Spectacular blue skies and calm seas – Cairns really put on a show for us – greeted teams as they departed the marlin marina on Day 1 for the saipast.  Being on board myself, I only have photos from the front of the line (which was truly spectacular – photos above and below), but we’re looking forward to seeing the footage from the helicopter of the boats proceeding down Trinity Inlet and out the leads (thanks Cape York Helicopters/Nautilus!) which we will see at the presentation.

Capt. Tim Dean’s Calypso got us started with a 300lber for angler Joel just under an hour into fishing.  But it was steadily slow going after.  Athaldo with Alan “Tiger” Geale at the wheel hooked up before lunch to a fish and were fighting through the first sked.  Meanwhile Capt. Dean Beech’s Onsite tagged on at 200lbs for Chris. Finally the call came that Athaldo had tagged putting the fish at 800lbs for Josh!

Up on the Ribbons themselves, Capt. Brent James on the wheel of Gorilla this season tagged a fish for Andrew they put at 250lbs and there was another lull until the big boat Reel Power called in a tag for Leon at 250lbs likewise on the Ribbons at Number 3.

Back to the Bank and a late flurry of small fish, two of which stayed hooked, one each for Capt. Bill Billson’s Viking for Richard and the kiwi team on Godfather for Lesley both that they put at 100lbs, and that was that.

7 fish for 54 boats..but lets remember the weather was glamour ;-)

PS – Day 1 blogging from the GBR and my first impression is that the internet service out here could possibly be worse than last year. Some tweets took a while to go out and some didn’t go in the right order but service in the very early AM (now) is okay. 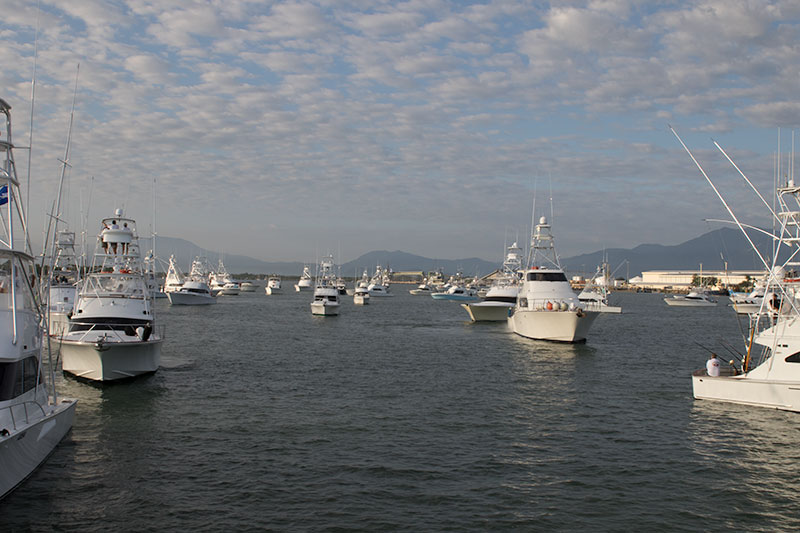