Three fish again for the top teams on Day 3, but this time they were different teams!

In a 40 minute blitz after start fishing, it was all Capt. Simon Carosi’s charge Assegai and Capt. Peter Jenyns’ Tsukiji calling in hookup after hookup. Assegai edging just ahead to tag their third of the day first which will give them the daily.  And both had their chances to add number 4 as well!

This put them both into contention on the leader board. For many other boats, including the tournament leaders it was a quieter day as the wind disappeared and glamour conditions returned to the reef. Overall, I had 15 tags reported for the day.

As it has been for the first two days of fishing, most of the fish were in the particularly small range (on KEKOA we tagged one that Luke put at 70lbs! Photo at top to give you an idea of  how tiny!) with the largest of the day coming in at 500lbs to Sharon Poulter on Think Big (still from Rigger cam below). This fish, just the one for the day put Sharon on 5 tags as an individual angler and well in front for the Champion Female gong. 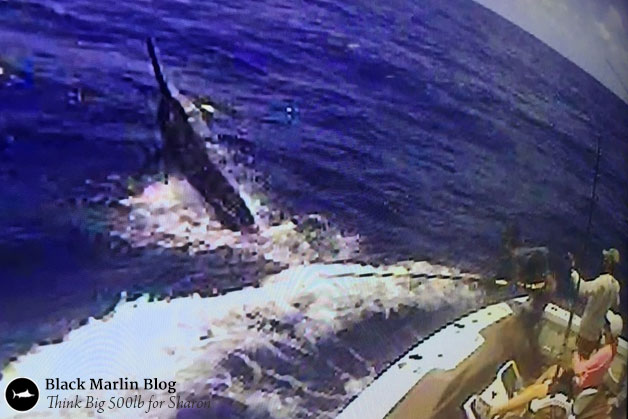 Other fish of note being a fish of approx 350lbs being satellite tagged on Port Hacking GFCs The Outlaw which was their first of the comp with the excitement unable to be contained from the radio :-)  Fellow PHGFC team on Capt. Daniel Klein’s Cookie also added to their tally to put them in the hunt.

Capt. Bill Billson added to his teams non qualifier of Day 2 with the last tag of the day going from big to very small with one that he put at 55lbs!

The current standings are:

Reel Easy leads from Askari on countback on 6 tags.  Iceman on countback from Think Big and Tsukiji in that order on 5 tags.  4 tags each for Assegai and then Cookie (with one minute in it!).  On three tags we have Top Shot from KEKOA. On two tags are Entourage, Hellraiser and Hot Shot. And one each goes to Amokura, Wild Turkey, Kalira, Topless, Zulu, Reel Shock, Duyfken, Burgundy Lady, Fascination, Kaizen and Viking II.

Outside of the comp I know nothing. It’s really one of those kind of years with most boats struggling to get online with the limited internet service up here. It really only works pre-6am in case anyone is wondering. Hence the blog reports going up nice and early.

We also might have a hiccup in terms of live reporting for the tournament from today with the Lizard Island repeater scheduled to come back online.  If it does, as we are fishing sufficiently south ourselves, I will no longer be able to hear the fish called in. :-( Anyways, if you are following on Twitter, I’ll let you know as soon as I do if I can hear them or not!