If you were on the social media channels on the weekend you would have seen the top pic above of the big blue lost on board Hayden Fretten’s The Outlaw on Saturday during the 2017 Port Hacking 100 tournament (report to come). With an ‘official’ 1000lb blue marlin yet to be weighed in Australia, this fish (and its size!) has generated a lot of buz. Unfortunately though lost, the boys were lucky to get plenty of pics below.

Hayden reports that they fought the fish for 3 hours on 37kg line. Rhys Younan-Wise, crewman on Capt. Corey Hard’s Askari in Cairns (and very seasoned on the 1000lb blacks!), had it on the leader 3 times during the fight with Michael Hill on the rod.

Initially called 850lbs (which in hindsight seems quite conservative!) it gave them a great display during the fight not going deep at all in 3 hours and giving them a jumping display every 30 minutes or so during the fight.   Unfortunately it was lost on the gaffs and left a devastated crew thinking of what could have been!

And another noteable catch back on the Gold Coast where for the second week running swordfish have been targeted and caught.  Capt. Craig “Sparra” Denham’s Hot Shot recorded their second daytime sword in a week with a fish at 70lbs on Monday.

And yesterday, Capt. Glanville Heydenrych’s Mufasa joined the club after putting in the time over the past several trips. Glanville said, with word of a relatively good blue bite they had to turn the radio off not to be distracted from the goal! And success!

They also missed the bite of another fish. 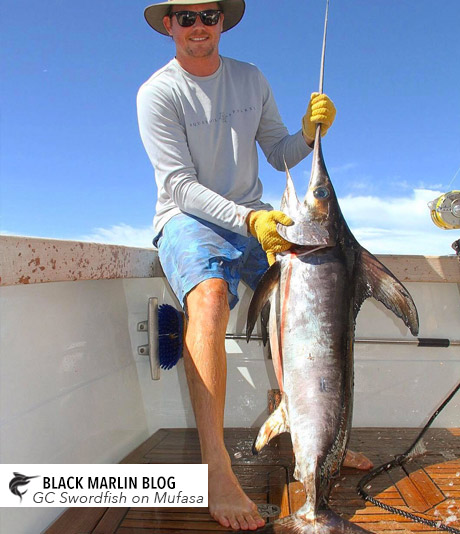