In Queensland, yet another long weekend was sent off in style on the Gold Coast yesterday by Mat Stehmann fishing on the board Oceaneer who went 4 from 10 with Brandon Matthews tagging all 4 fish (angler) and Brandon Dietrich tagging and on the leader!

Mat says that while the fleet headed north to lookout and chase blues, he made the call (and gamble!) to fish south as the water looked awesome. Hitting the water at 5:30 they had lures in at 6:30 in some horrible conditions.

Lures back in with a few adjustments made, hooks replaced and rums drunk as they started trolling again and not long after crack short rigger screams off. As they clear the gear another blue chases the rigger all the way to the boat but we pull it out just in time, settle into the fight and get him half way too the boat and hooks pull (0 from 5!)

Lures back out with frustration is in full swing now, turn around and head back over it and not even 5 mins later the long corner goes off and this time the hooks are in and 40 mins later they tagged the first for the day, a nice 140kg stubborn fish.

Voodoo broken so now so it’s game on!

10 mins later as they marked one on the sounder which was quickly follwed by a crack as the shotty goes off to a nice 90kg blue. Number 2!

They bite slows down so they go for a hunt looking for the fish it’s now 12noon and they are 2 from 8. A couple more raised but none eat as they tease them right up to the boat.  Just as they were talking abotu returning to the previous hot spot the rigger goes off to a fat 150kg model which was tagged in 4 mins – 3 from 9.

Mat makes the call steam back to where they where in the morning and on the way they spot a JC (Jesus bird) skipping on the surface and head to it and as Mat opens his mouth to say these things are marlin magnets, crack the shotty goes off again and dumps a good 300m of line. After 10 mins it comes up jumping and they see it’s a nice one. With dark also chasing, 58mins later they tag a real nice one that mat puts at an easy 600lbsbin the dark and celebrate with an icey cold rum.

What an end to a cracking day! Mat says bring on the next weekend as they now have to beat the boat record of 4 from 10! 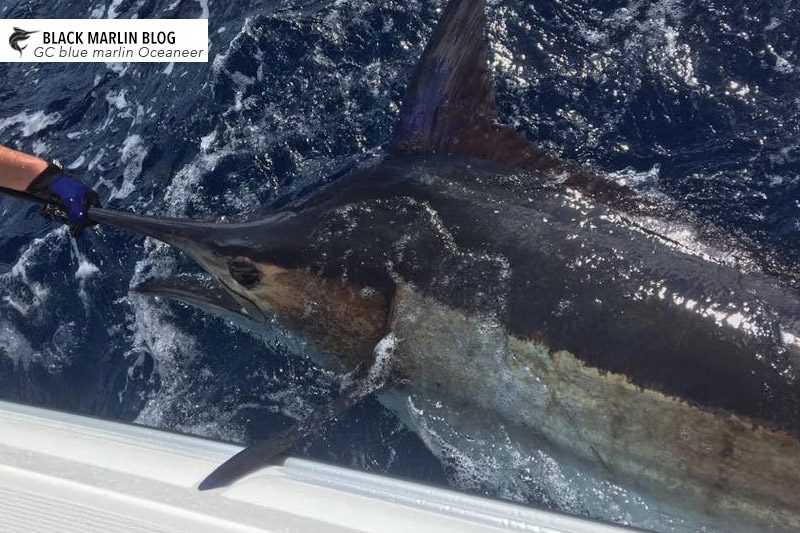 Elsewhere… Grant Thomsen’s Cjig also went for a run and went 1-1-1 on a 400lb blue on the Point Lookout Canyons.

This follows up from Saturday on board Mufasa with Glanville reporting lots of cold green water around which he spent a lot of time traveling north with the weather to avoid. He found some really good water around lunchtime got 1 straight away and missed another straight after and had another in the spread 20mins after. Unfortunately they had to leave shortly after to punch our way 30nm home into 27knts of SE….  Glanville says they are back out today on the sword hunt! 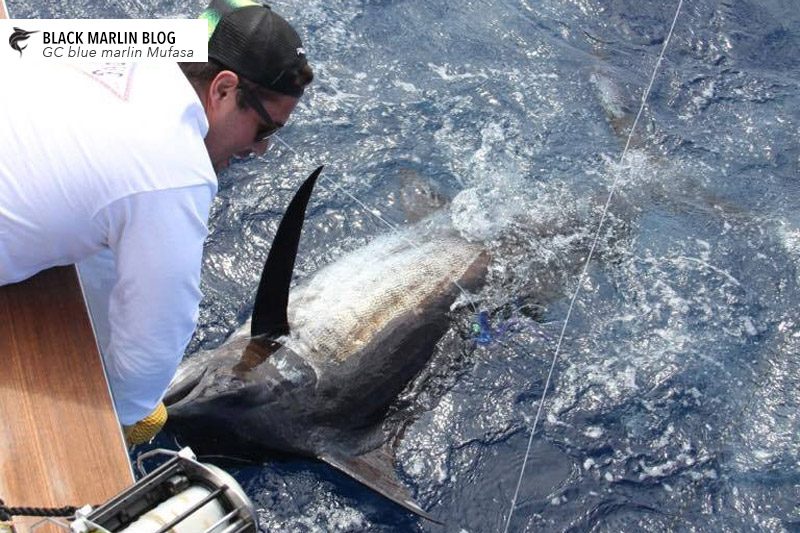 And also Capt. Bobby Jone’s Merlin is currently enjoying the waters of Fraser Island. Fishing late last week before the wind came up with Capt. Ross McCubbin on deck, Lorraine went 1 from 2 blues on Tuesday and 2 from 4 Thursday – 1 black and 1 blue. Ross said the water looks really good with lots of big yellowfin along the edge.