Jesse Hill tells me he thinks he’s paying dues for his good fishing as he watched two boats release 4 blue marlin a piece on Tuesday without a single release himself. Though he (Jesse) was still kind enough to send me the report!

Jesse said he and Express (Andrew Morely) returned to the same spot that Oceaneer fished the day before with Express the first to hook up, and continuing to hook up all day. They called it a day at 3:30 for the run home with a 4 from 9.

With Jesse electing to stay and fish still not having seen a fish (fishing right next to and with the same lures in the water), Jesse says they were determined to at least put a hook in one.

They were joined by Caboom for the arvo bite, who instantly hooked up and tagged a nice blue. They then went bang, bang, bang in quick concession and ended up 4 from 10+. (Update: Caboom went 3 from 4 again yesterday!)

Jesse says it was finally their turn as they were pulling the gear in at 4.03pm. A nice stubborn fish, which had Christie in tears after pulling the hooks after 45 minutes just out of tagging distance.

Just one of those days when nothing goes right for you!

Capt. Glanville Heydenrych’s Mufasa also had a frustrating day fishing for swords but managing a blue in between drops (and only had a lure in the water for less than an hour!). Glanville said it could have been a big numbers day for them too if they switched species :-)

Up at Point Lookout yesterday, George Carr crewed heavy tackle for a 3-2-2 onboard Matt Fishers Breakaway with Matt as well as Jacob Cavalerie and Steve on angling duties. 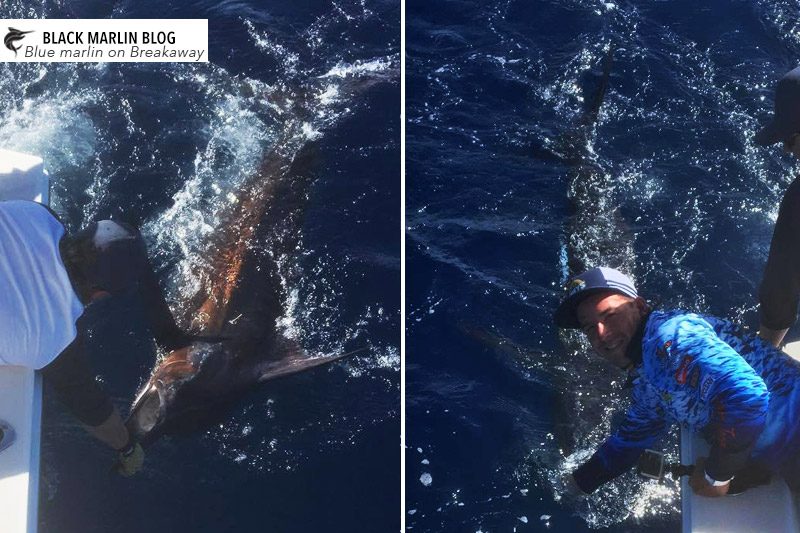