The Masters Tournament was created by the Exmouth Game Fishing Club for anglers over 50 to target billfish and other pelagic species off Exmouth.

This year it was extra interesting with four junior deckhands taking to the cockpit to assist the seniors!

In total there were five teams with 11 anglers and 21 crew that tagged 14 billfish.  The majority of the billfish were black marlin with a couple of sailfish as well.

Dale Moir drove up from Perth for the event with Scott Owens and Dale took out the Champion Sailfish and Champion Marlin sections, while Dave Thompson took out the Heaviest Tuna section and Jim Ireland won the Heaviest Mackerel/Wahoo section.

The Champion Team Mixed was won by Team Azura and the anglers reported that the conditions were perfect, especially for the seniors and juniors aboard.

Thanks Jeni for the results – and while talking about the Masters, we confirmed no Gamex report had made it onto the blog yet this year. So here is also a belated Gamex report!! 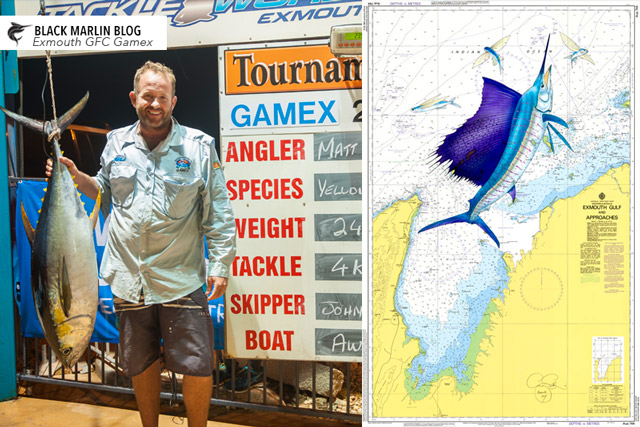 There were 85 sharks tagged and 411 billfish raised, with 133 billfish tagged. Although this was less than previous years, it is still a great result.

The Exmouth Game Fishing Club is a leading club in Australia with scientific research, educational programs, events and satellite tagging. EGFC has also won top tagging club in Australia several times, which is testament to the efforts made by the volunteers within it.

Anglers participating in GAMEX 2017 reported that the event was fantastic, with valuable information learnt, fun social events and good fishing, despite the windy weather.

Three trophies were awarded to anglers, as well as a number of highest point scored and champion individual and team accolades.

Ryan Turner won the Steve Pitman Memorial Trophy for most skilled angler. He recorded 7709 points over 11 line classes and 10 species on board with team Razorback.

The Phil Tickle Memorial Trophy for most meritorious capture went to Murray Lewin from Salty Dog for capturing a 7.5kg queenfish on 1kg line.

The positives from GAMEX included some very valuable data collected by the two scientists sent up via Recfishwest to take samples and do research on fish captured. They requested three young black marlin weighing about 15kg to study growth rates. RecFishWest chief executive Dr Andrew Rowland caught a 16kg black marlin on day two of the event, which was his first ever marlin. Dr Rowland was pleased to be able to assist with the research and talked at length during the weigh-in with anglers about the fish captured. The fish was under one year old and is being sent to the University of Queensland to try to determine its age in days and where mature marlin spawn in WA.

The Australian International Billfish Tournament was held the week prior to GAMEX and, despite the windy weather, the teams enjoyed the fishing for tagging and releasing marlin and sailfish. It is looking positive for EGFC to host this event again in 2018.

HPS Game fish other than billfish or shark on 1kg

Runner up: Matt Arscott 4.5kg Queenfish on Awesum with 450 points

HPS Game fish other than billfish or shark on 2kg line

HPS Game fish other than billfish or shark on 3kg line

HPS Game fish other than billfish or shark on 4kg line

Runner up: Ryan Turner 8.8kg Barracuda on Razorback with 220 points

HPS Game fish other than billfish or shark on 6kg line

HPS Game fish other than billfish or shark on 8kg line

HPS Game fish other than billfish or shark on 10kg line

Thanks to WHITEY’S TACKLE IN AUSTRALIND

Angler with the most species on the most line classes

Thanks to MAHI MAHI FISHING CHARTERS

Captain with the most tags

Thanks to SIESTA PARK

Again, the EGFC would like to thank all anglers, volunteers and sponsors who assist in helping the club with research, education and events to enhance the awareness of the benefits of recreational fishing through GAMEX.