Taking advantage of some nice weather in SEQ over the long weekend and also getting amongst the fish, Nathan Douglas sent me a report from Capt. Russell Caphorn’s Kaizen.  Nathan reports a 3-2-2 straight lining the boat home from Gold Coast to Mooloolaba with 220lb and 350lb blues and also missing a bite from a 120lb black. Damian Birtek angler with Nathan on deck all on 50lb.

Jesse Hill’s took advantage of the start of the school holidays yesterday in his boat Reel Teaser and found the stripes al-la Port Stephens style on the bait balls.  Jesse said they had 3 fish up at once in first 8 minutes of fishing. Then once we found the bait balls 5 hours later it was on. Every bait ball had fish on it. They raised 6 fish on 5 separate bait balls and found another two that didn’t come up.  Unfortunately it was a bad day to forget the pitch bait with the conversion rate suffering and just the one release.

On Sunday Shannon O’Malley christened the new boat with a blue and stripe to first time marlin anglers as well!

But that’s not the only place they show up!  Weipa’s Ben “Notso” Bright sent me this pic over the weekend while he chased up the details of a sword that had washed up on the beach of the Gulf of Carpentaria near the Pennefather River just north of Weipa.  The sword was found by Weipa’s Daniel McDonald about a month ago.  Daniel said that the fish was still alive in the shallows when he found it although very weak with remoras still attached.

A very confused fish with deep water over 500 miles away (a wrong turn?). The fish looked to be about the 80kg mark. 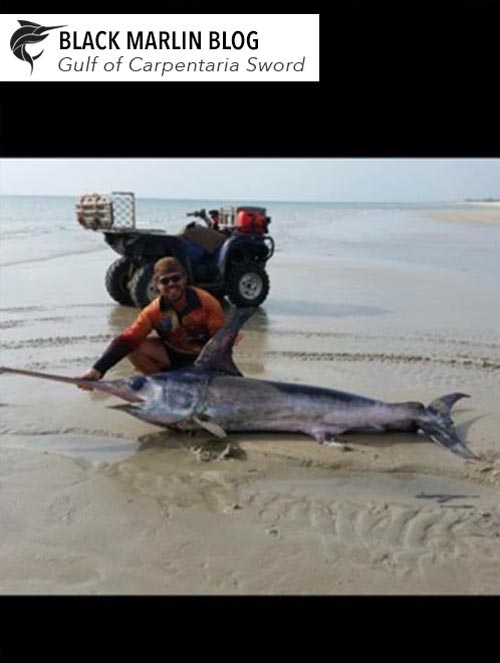