Following up from their win at the Lucinda comp, Bernard Tracey fishing with Mutta again on his boat Electrocution was on a mission to put 11 year old Keira onto her first black marlin. Well done Keira!!!

Bernard said that despite the good fishing at the comp it was a harder day on the water for them only raising 1 fish just before stumps. But Keira made sure it wasn’t getting away!  She got it pitching a live bait after it was teased to the boat. And it gave her a really tough fight (resulting in 8 blisters on her hands!) and some sore muscles for her troubles.  But Bernard said you can’t wipe the smile off her!

Fishing Tuesday off Cairns Capt. Darren “Biggles” Haydon on Bounty Hunter also made short work of the little blacks releasing 4 from 5 for his guests as well as boating a full feed of mackerel.

Yesterday Luke and I put in at Mourilyan in our 19foot Grady White Senshi to take advantage of the better weather south going 1 from 1 and home after lunch. And in Townsville I also heard that another of the club boats was in on the action releasing one from 5 at last report.

So plenty still around, all the way along! 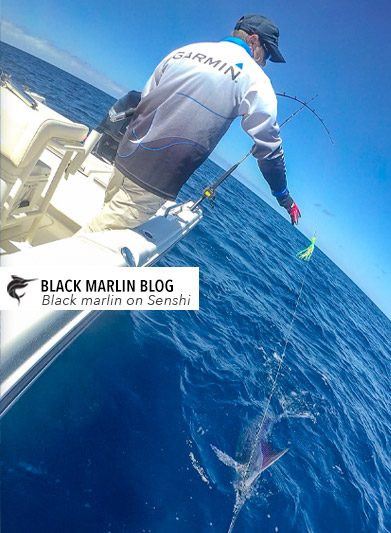