Back after the comp

A lot of tournament boats not fishing yesterday as they made their way back to port after the Lizard Island tournament.

But in the private boat fleet, the Dosen brother’s Live Wire was back amongst the action over the weekend with 4 fish in the two days, including 3 from 5 yesterday at 350, 300, 600 and one that he put in the ‘real one’ category.  Paul took some great pics as usual at top as well as a still from the video.

On the Ribbons, Capt. Tim Richardson’s Tradition went 1 from 2 on a smaller fish unfortunately pulling the hooks on a real nice one about 30 foot from the boat after a 1hr fight.  And Myles Westin’s Elempi is on its way back into Cooktown to changeover after 5 days fishing converting 5 from 10.  They also unfortunately lost a big fish yesterday after 2 hours including an hour at sunset but the boys also enjoyed some great bottom fishing and popper fishing thrown in!

Amanda sent me some photos from the week on board Capt. Casey Dent’s Zulu.  Zulu was among a group of boats that scored 6 tags on countback from Little Audrey also on 6 tags in third place.  Amanda said the fish ranged between 100lb- 800lb and unfortunately they jumped off numerous small fish including a little blue marlin which was feeding on the edge.

The final stats were 21 hook ups with 12 tags (10 marlin being 8 blues and 2 stripes). Champion Junior Angler T&R went to Bree Thomsen on Witchway (a blue and a stripe for Witchway). Most Tagged Other Game Fish went to Old Skool with 1 dolphin fish. And as reported yesterday Champion Boat T&R went to Mufasa with 2 blue marlin.

Glanville says they had some pretty unreal teaser bites – let’s just say the fish were hungry.  On Saturday, comp day besides the 2 from 2 they had 2 other fish up in the spread that didn’t eat and one of them was a true monster. A proper Cairns style fish that just ghosted behind a lure, stayed with them for 100m or so but was never going to eat.  The Gold Coast season has been on fire so far this year and Mufasa is now 13 from 16 bites for the season in only 6 trips. Glanville’s going to be back out chasing that monster again after a short stint in Cairns! 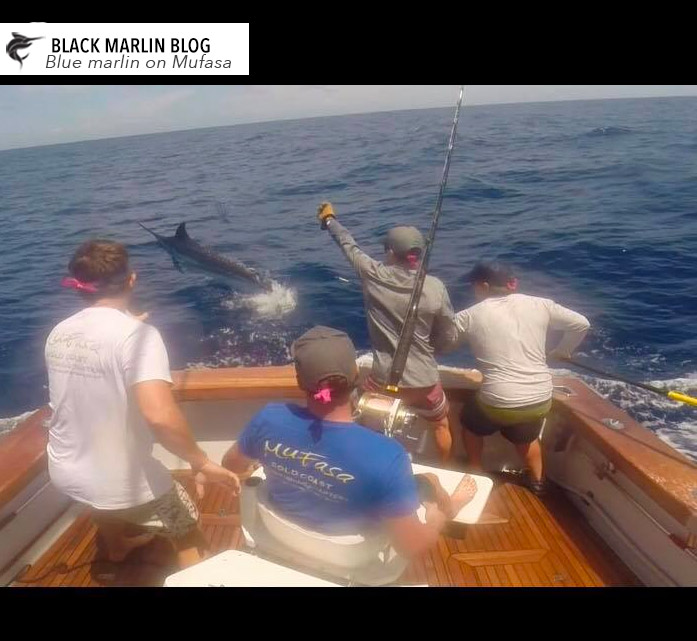