13 boats braved a rough forecast for the Malcolm Florence Memorial comp with a few finding action straight away on Saturday but failing to convert. Mile High with a 3-2-0 and Investergator a 2-2-0 on the sked with the only marlin tagged on the first day from the ‘old firm’, the Mathieson’s, Rod and Ben with Brendon Dawson on Game Changer.

The second day was even rougher with many boats searching for billfish in close around the Palms. In the end, 3 marlin were tagged with the team on board Electrakushen managing 2 to take the honors. Runners up were Game Changer with a special mention to the Travers boys, Jack n Will who in the Sharkies Division in the TGFC showed many of the grownups how to do it, with Jack taking out Champ Junior as well as Heaviest Gamefish with a yellowfin tuna at 7.5 kgs.

Bigger and better for next year with a big thanks to all sponsors and competitors in making this small boat friendly comp another success!

Peter “Mutta” Mamino tells me that while the bait has been hard to find the fish have been there since as well with him converting another 2 blacks and a sail this weekend gone.

Ahead of their big annual comp at the end of September its great to more reports starting to come in. Ben “Notso” Bright tells me that its all started a bit earlier than usual this year thanks to some good weather (finally).

As the weather continued to hold, Ben on Last Cast and Get ’N Any got out there, and although reporting plenty of water between the fish, there were several more sailfish tagged along with a 200lb black marlin fought for 3 hours into the dark, being too good for Ben on 10kg.

Bait seemed to be moving around quite a lot however whenever it was found, the fish were there with it.

Get N Any finished with 5-4-4 sails in two days as well as raising a couple of sizeable black marlin that wouldn’t eat.

Last Cast finishiedup with 5-3-1 for the 3 days and saw some a cool bait ball being harassed by a pod of less than hungry sails!

Thanks Ben for the report and pic :-) 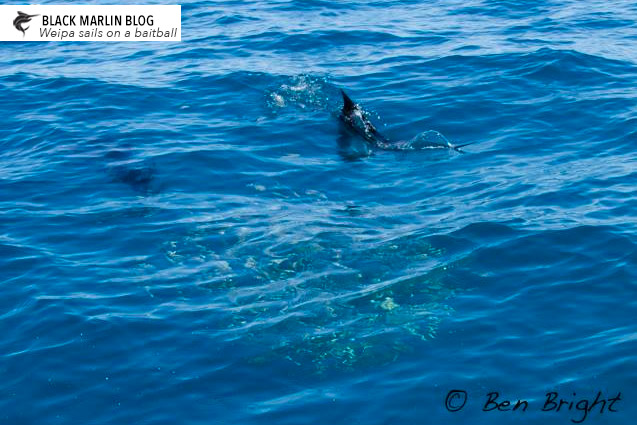 17 teams comprising of 61 anglers including visiting teams from Queensland, Tasmania and Perth competed with the final stats an outstanding:

The last 10 years of tournament stats for comparison (from my records!)