Big catch up report from Rhys on board Reg Moore’s Duyfken back from 6 days up the Middle and back for their annual mates week. As the fleet headed south they had the lower Ribbons to themselves for a few days where they caught a few smaller fish and one real nice one for Mick Paynting. Next they returned to Escape Reef where they spent 4 days again enjoying it all to themselves.

Rhys says that on Saturday they caught and released maybe the biggest fish they have caught on the Reef (also for lucky in line Mick). She was almost a part of a double header but unfortunately she didn’t bite after coming up on the stinger while they already had a little one hooked up. But they made quick work of the little one and sure enough as they passed back over the spot, the scad went again and this time she was on.  After having the leader early, she towed them around the ocean for 2 hours on sunset drag. As the sun set, they wound up the preset and upset her big time, she came up and they got the leader again and set her free.

Still plenty of fish around. Capt. Daniel Klein followed up from his ripper days on Onsite with 2 from 3 at 300, 400 yesterday. Capt. Luke Fallon’s KEKOA also 2 from 2 yesterday following up from 2 the day before as well to 550lbs.  Capt. Tim Richardson’s Tradition also added one yesterday.  And Capt. Ross Finlayson’s Bounty Hunter added another big fish at sunset he put at 900lbs!

Official report yet to come in but congrats to Andrew and Ryan Tivey on Hook In who took out the Under 7.5m award after a couple of big days. Andrew says that they ended up tagging a 900lb-er 15 mins before cease fishing yesterday to give them the win. Wild Turkey took out the Champion Boat and Over awards with Matty Bergamo Champion Angler. Munroe Brothers were Runner Up Champion Boat.

Back on Hook In Ryan also fought a big fish for 4.5 hrs, the last 1.5 on sunset drag on Saturday. They had the rigger tie up several times but never got to see the fish again after the initial run. At 5.30 they went hard as it was a long run back to Opal Reef for the night and broke it off. They also pulled the hook on a nice mid ranger on Saturday as well.

Photo below I took of them hooked up on Saturday. I missed the initial jumps! Good to see the little boats among them! 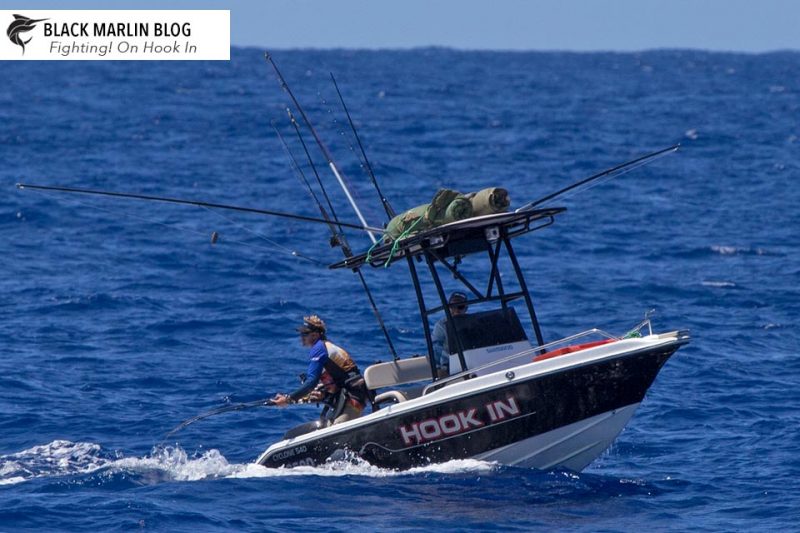