Catch up reports from the reef

Last week Capt. Brad Craft finished his first trip of the season with John Brookes and Brian Hamilton and partners Wendy and Narelle on board Duyfken.  John last fished with Brad back in 1994 on Shoki and so it was a reunion of sorts.  Brad says they had a great trip with excellent catches of red emporer, nannygai, coral trout, Spanish mackeral and yellowfin tuna. They also had quite a few marlin bites and caught fish up to 350lb as well as raising a fish around 800 lb. Both Wendy and Brian caught their first billfish.  Brad says its awesome to see the reef is still GREAT and he has time still available in October and November – jump on board!

Also last week Capt. Corey Hard’s Askari finished their first trip of the season with 5 in 7 days including a big one which was also their first fish. A top way to start the season.

On Tuesday fishing at Linden Bank off Cairns Capt. Jason Legg on the newly renamed The Joker released one.

And Capt. Adam Jordan’s Iona finished up a trip with Brilliant Company’s Marlene and Russell Hicks on Friday with 4 from 9.

Sunshine Coast GFC’s Reel Crazy fished light tackle over a few days for 9 blacks and 1 sail all on 4 and 6kg. And good to see some more of the fishing family genes with my cousin Travis Byrne also fishing Fraser in his trailer boat yesterday going 7 from 11 for the day.

Over in the west adding to the variety again the Blue Lightning team went out wide and got rewarded!
On Wednesday they converted 3-3-2, a black and a blue and on Thursday went 2-2-1. 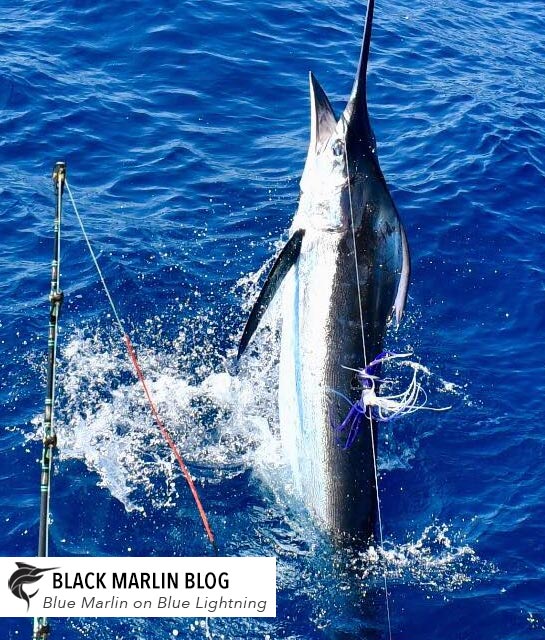