Updated Tuesday: Some more great numbers fishing Monday.  James Holt’s French Look III took the lead in the numbers game with an amazing 33 blacks yesterday.  They also had 14 Saturday and 13 Sunday to notch up 60 blacks in just three days of fishing!  Mat Stehman’s Nxt Level was also in on the action yesterday notching a very impressive 21 from 26.  Mat said their fish were around all above average around the 50kg mark with one over 100kg!

Catch up report from Sunday with Capt. Jason Hedges’ Unleashed recording 21 as well. Jason reports they were marking 5 or more fish on every bait ball and more often than not the baits weren’t making it into the outriggers before getting bit.   He says its awesome to see such an healthy fishery here on the Gold Coast and even better to see all our fish released healthy to catch another day. Unleashed’s final stats were 26-25-21 including 2 double hook ups. and fish ranging from 30 to 100kgs. 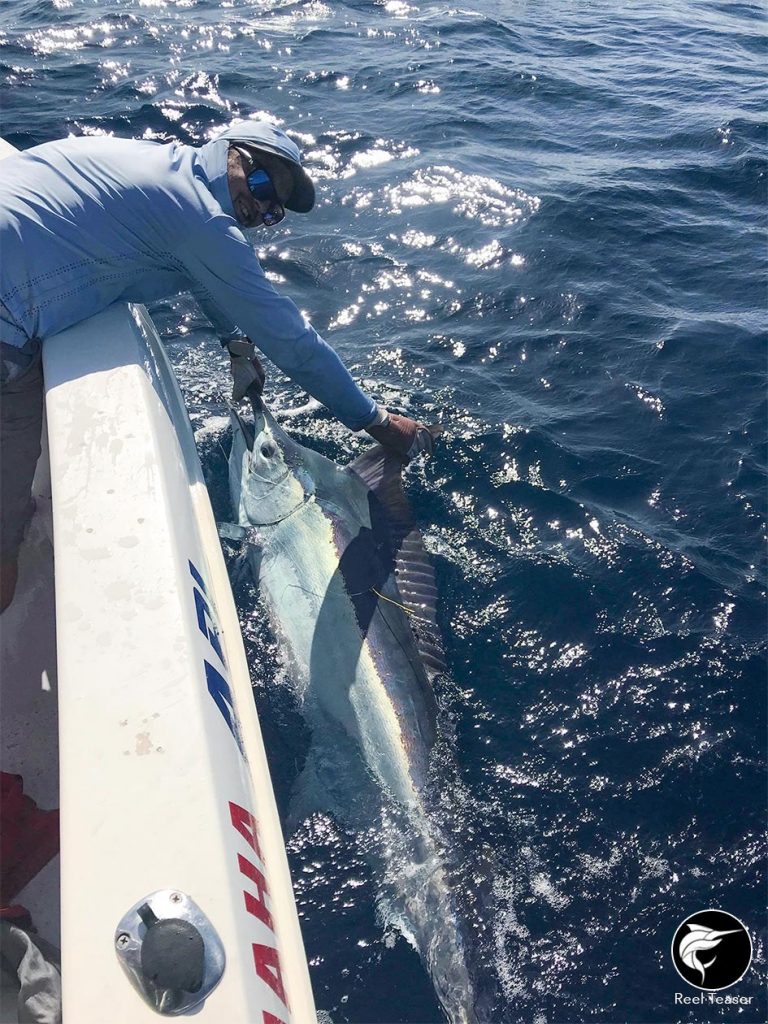 The Gold Coast has been the hot spot of the the summer and the great fishing even ramped up a level yesterday! Jesse Hill fishing his trailer boat Reel Teaser 2 up with Adam Argus on boat notching up a crazy good 24 black marlin yesterday. An amazing feet both 2 up in a trailer boat with Adam doing the bulk of the winding on 22 fish.

Other boats also in on the action with Brandon Dietrich’s Oceaneer tagging 11 from 12 and heading home at lunch. And Capt. Ross McCubbin’s Lucky Strike also tagging 9. And so more great numbers from other boats to come as well!

David McMaster’s Pitch Black was back in the action on the weekend going 3 from 4 on Saturday all for young Bryce Bartleson. On Sunday they followed up with 3 from 3 with one each for Dale, Barto and Justin.

Earlier in the week Rob Smith’s Capricorn released 5 blacks breaking the camera hoo-doo jinx with camera crew on board from My Fishing Place.

Congrats to all who were fishing the two day shootout. Some great individual results with Champion Boat Zorro recording 8 stripes and a black in the two days, all for Champion Female Hayley Bonnici. Runners up on Lucky Strike tagged 7. Total stats for the comp were 146 tags made up of 107 stripes, 9 blues and 30 blacks. 161 boats competing with 771 anglers!

Heaviest Marlin over 258kg: Not Won