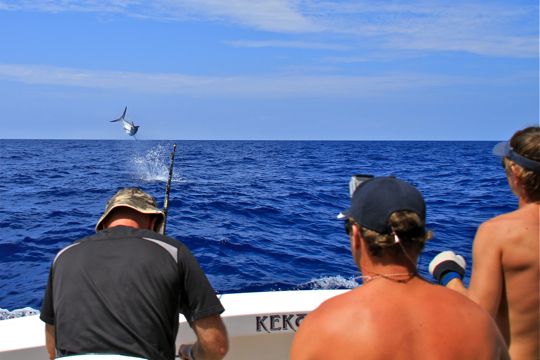 After a couple of days of nice flat calm weather, Wednesday started with a tropical thunderstorm rolling through the anchorage at 2am, and the clouds and rain still lingered by morning… But what a day it turned out to be. By lunchtime, the sky had cleared to blue and the wind had dropped right back.

On KEKOA, we trolled south over the Bank and in towards Spur Reef and picked up two energetic flying blacks in the 200-250lb range for Adrian and Blake before taking an early mark back into port. That put us a five for the three days. We’re out again late this afternoon and fishing tomorrow.

Capt. Tim on Tradition reports it was a bit quieter on Number 8 yesterday. He headed up to Number 10 Ribbon Reef and released one from three on Second Corner before heading into Lizard Island.  I also spoke to deckie Brad on Iona who also came in for changeover from their latest trip ending with  6 in 7 days including the 950lb-er at Escape Reef and another in the 500lb range.  Brad tells me they also had a ball spearfishing and fishing for bait in the mornings.