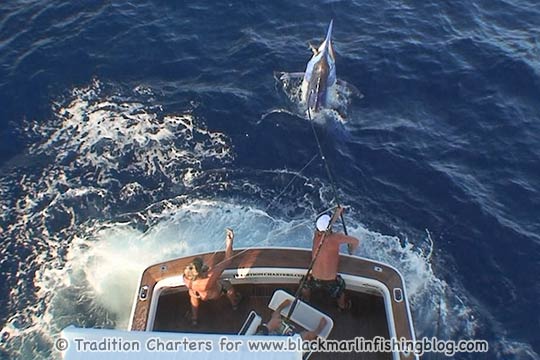 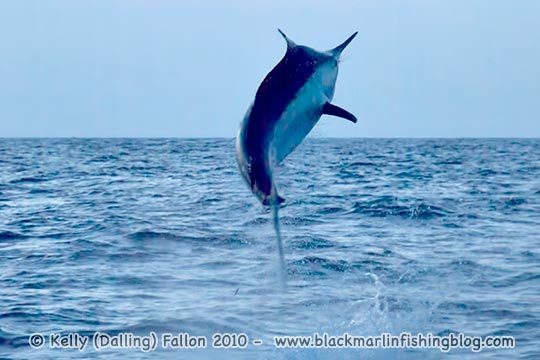 While some boats heading north including Capt. Tim Richardson on Tradition were rewarded with a nice fish up early – Capt. Tim reports another big fish for his bumper 2010 season with a 950lb-er for Catherine to go with her husband Steve’s grander from a few days ago (main photo top) – the rest of us had to wait until the late afternoon bite to see any real action.  I had a call from Capt. Jim on Amokura at 5:35pm to let me know that they’d just released a fish that he put at 1100lbs (hi Moose!) for angler Michael, the same angler for their 990lb-er the other day (photo thumbnails above).  Capt. Jim says it was a monster fish carrying its weight all the way through to the tail.

On KEKOA, Rick hooked up to his very first black marlin at 10 minutes before 6pm and made short work of the 250lb-er.  And just after six o’clock, Brendan hooked up to a very solid 950lb-er that he fought for 45 minutes, doing some spectacular jumps on the leader before we busted it off on the leader at the back of the boat (2nd main photo above).  I also heard from Capt. Dan on Moana III who released a 400lb-er at Jenny Louise.  And fishing the tournament, Spartacus fishing the sea mount went one from three (150lb) that put them into second place in the comp.  Today is a lay-day for the tournament but no doubt many of the boats will still be fishing.

Some more catch up reports from Ben on In The Black who have fished 5 days with the owner and some friends tagging 7 from 9 fish.  Ben reports one was a real nice fish that they put well over the mark that Gold Coaster Keith Twist fought for 3 hours on sunset.  And three of the fish were to first time anglers.  Likewise, a late report from Valkyrie who on Friday released a fish they estimated at 1200lbs+ on a lure just on dark after a 2.5 hour battle for angler Tim Walsh.