Just a little of everything! 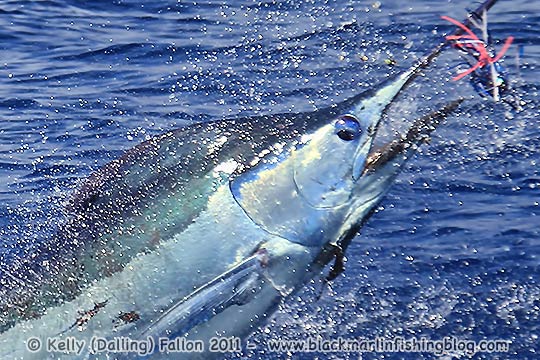 Day 1: The tournament kicked off yesterday with the 26 boats entered.  SCGFC Captain Rob Smith reports there was one light tackle black marlin caught on Tony Cross’ Out Quoting and a couple more dropped.  Matt Wallace’s Fish Whisperer, with Ross Martin on the sticks, has raced to the front with a heavy tackle blue and heavy tackle black, the first and last fish of the tournament thus far.  Inside Edge (Andrew Yeh) released a HT  blue marlin and Reel Capture (Craig McCulloch) a heavy tackle black.  A good number of other game fish have been caught as well.

Day 1: The Jess Sams tourny also kicked off yesterday at Ulladulla (NSW South Coast) with 38 boats fishing with 11 marlin tagged and one weighed.   Craig Murphy’s son Jacob tagged his first marlin on Dadsboat. Mayhem are in the lead with three tags.

Kicks off today with a good showing. I heard from Capt. Ben “Notso” Bright that while some (who?) boats were still running out the first fish was recorded – a tagged spearfish.  Ben is fishing with Capt. Scotty “Johnny Denver” Thorington this NSW season on board his new charge, the 35 foot Pirate Flying Fisher 1. Ben tells me that Scotty christened the boat with its first marlin last week and Ben followed up a few days later with its second (with Ben at the wheel due to Scotty’s hopefully short enforced ‘holiday’ off the boat, but that’s another story…!)  Flying Fisher heads to Port Stephens on Monday after the tournament.  Also fishing Lake Macquarie, Cairns regular Brad Curtis, back at the helm of his fathers 47 O’Brien Ningaloo. Brad reports they are already on the board as well with a striped marlin this morning.

I was away again this week and have some belated reports.  Capt. Ken Brown on Megumi reported one from one blue marlin approx 300lb Tuesday on the canyons east of Mt Tempest on Moreton Island.  They also jumped one about 400 off on Monday in the same area. The fish went ballistic on hook up and gave them a great show.  Ken’s also been catching some donkey mahi mahi (like this one below for Laurie Smith – thanks Ken) and a few wahoo.   Mistress was fishing off the Gold Coast yesterday (Friday) for one from two blues around the 250lb mark.

It has been a little quiet but perhaps the bite has just started.  Brent Hancock, usually on board Born Free but now at the helm of his new Tackle World store at Nelson Bay reports that the Victorian trailer boats have been having some luck this week with some getting 2-3 bites a day.  A couple of nice blues were caught last weekend with one boat weighing one 142kg. Brent says inshore the water is 23.5 and a few blacks are kicking around.

I’m also a week behind on this one but I heard from Capt. Dan on Little Audrey, who are heading up to Port in the next week, that Askari released 4 last weekend (2 blacks and 2 stripes?) on late afternoon bites. As more boats show up for the season, more reports should filter in. 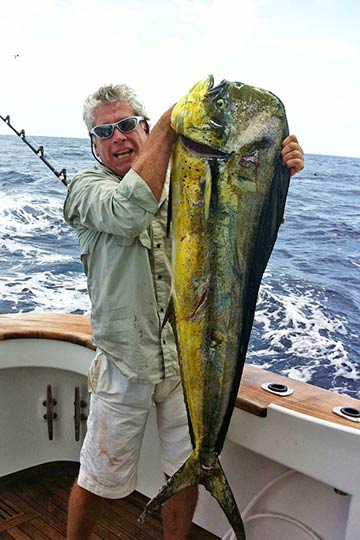