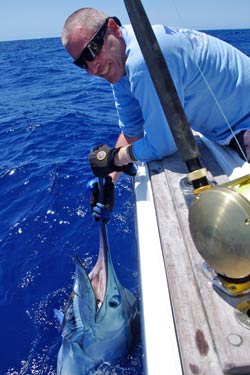 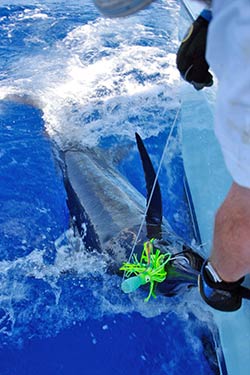 A report from Rick O’Ferrell from the Solitary Island GFC’s monthly competition day on the Coffs Coast yesterday.  Rick reports the forecast was great as were the SST satellite shots, indicating a big pool of warm water passing down the shelf abeam Coffs right on cue.

11 club boats headed out and the blue marlin were biting. The water was clear at 28.5C in the middle of the warm pool at 400 fathoms where almost all the action was with good bait on the sounder, and birds all over the place — but the EAC was flowing downhill at 4.5kts, so things went past pretty quick.

The standout boat of the day was Rob Lang’s Blackwatch Black N Blue who hooked up mid-morning on a big blue which smashed a lumo green Ocean Tech plunger. A nice big blue, it gave angler Jason Everson a real run for his money. Finally after two hours, with the drag on sunset, she finally gave in and was tagged next to the boat. After consulting the length/weight chart the boys put her at 300kg (660lbs).

A couple of hours later another smaller blue window shopped the selection then had another go on the same lure and was tagged after 35 minutes estimated at 120kg (260lbs). It seems ilke that was the hot lure of the day as it also netted the boys a dolphin fish.  Both marlin were caught on 37kg (80lb) and gave Black N Blue top points for the comp.

Roughy released a nice little black marlin on the shelf while No Frills tagged a solid 200kg (440lb) blue on 24.  Several other boats also missed strikes from the blues but the hard luck storey of the day was from Alcatraz, who hooked up a great-looking blue which Ricks says took off heading for the South Pole at a hell of a pace. To keep up, Alcatraz was backing up pretty hard, but took one green one over the stern in the process, and some of the water found its way under the engine hatch, and then shorted out the distributor cap (another reason not to have a petrol engine…!). So the boat stopped dead, and they sat there powerless to do anything but watch the marlin empty the reel and spooled them!

Thank you Rick for the report and the photos of Black N Blue’s fish – big fish with skipper Rob Lang on the left and the smaller blue to follow on the right.

————
More excitement from Port Stephens: If you aren’t on Facebook you might have missed the report yesterday from Ben on Flying Fisher 1, with Ben taking the helm again from Scotty who is on R&R.  They boys followed up their two blacks on Wednesday with a grand slam Friday, a black and a stripe followed by a blue that had the boys thinking outside of the box.  When the reel seized mid fight, Ben had to leave the helm with the boat in reverse still backing down on the fish to help tie the line off onto a working outfit.  (Which they were able to do despite some confusion which initially saw them tying the line off onto the same seized outfit it came from!)  After three drama filled hours in very trying conditions (weather wise) the fish was released. Not a bad day too for the 16 year old decky who had leadered his very first marlin that day!

Ben says a much quieter day Saturday with the only fish he heard caught down deep in the cooler water.