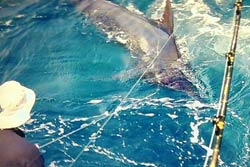 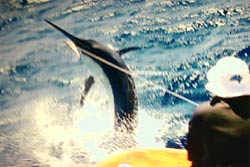 It’s only the middle of September but the season is already shaping up well as members of the fleet kick off their 2011 seasons almost daily. Capt. Chris Jolly and the boys on Amokura notched up their first two heavy tackle black marlin on their first day of the 2011 season yesterday. They started off early with a 300lb-er for angler Kevin Curry before lunch. Then ended the day on a high-note with a second black, this one Capt. Chris put at 850lbs for angler Dean Shears (photos). Chris tells me the weather was a steady 20+ knots but it was a good troll down the outside with the from Jenny Louise through Flynn Reef and Linden Bank to spend the night at Opal Reef. Both fish were caught on Zacattak Smoker lures.