A couple of very notable catches yesterday as fishing moves into another gear and we count down to less than a week to the start of the 25th Annual Lizard Island Black Marlin Classic.

At the top, still day tripping from the island to fish Number 10 Ribbon Reef, the marlin kept them waiting on board Cjig yesterday, with just the one bite late in the day. But it was more than worth the wait with the biggest fish that owner Grant has ever seen behind his own boat that he put at very near the mark released for son Julian. They made it a family affair with Julian in the chair, Grant on the leader, mum Cathy at the wheel and little sis Imogene the official cheer squad! Grant says that it was the perfect big fish for Julian (who spent most of the fight on his feet out of the chair) as the fish didn’t do much of anything and they were able to sneak up on it before it gave them a bit of a display on the leader. 11 year old Julian is suitably stoked now with four marlin so far on this trip to a massive 950lbs+!

Likewise, on Number 3 Ribbon, Capt. Tim Richardson on Tradition made his only bite of the day count with a solid 900lb-er. Tim said the big girl had three other fish with her at the boat. A great fish for their second of the 2011 season!

Back up at the island, Capt. Craig “Brutus” Newbold on Fascination is still getting a fish a day for his overseas lodge guests with another black marlin yesterday at 250lbs released. The legendary Billy Fairbairn on deck told me it was a bit of a cheeky bite with the bait just losing its tail to a barracuda right before the marlin bit. They’ve also been giving their Go-Pro a whirl on the pole camera beside the boat and I’m told to look out for photos soon.

I had a message from the UK boys Phil and Stewart (below) who leave their island today to make their way to ours for the tournament on the weekend. Only 5 days of traveling ahead (!) and they are chomping at the bit to get here and start fishing! Stewart tells me that he’s been reading the blog daily and has already decided that they will be seagulling Brutus for the 8 days (look out Brutus!) and that they look forward to seeing friends and staff on the island–it’s an experience that they look forward to all year.

I’ll be live blogging the tournament action again this year so stay tuned. Likewise, photos are coming I promise, as we start our 2011 Heavy Tackle season this Friday and I’ll be on the water too. 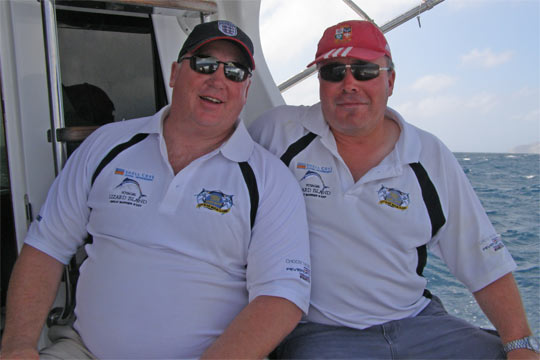