Big Girls at the Top & Four on Four 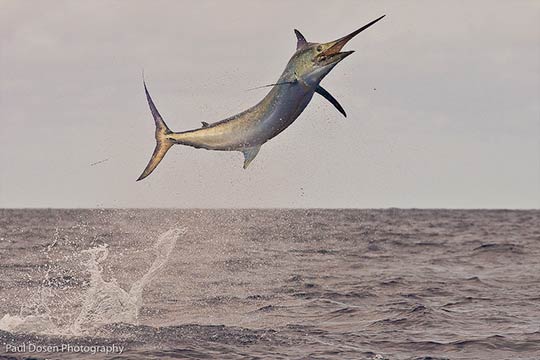 A beauty photo from Paul Dosen of a 400lb-er for Pete on board Spread’em fishing Linden Bank Saturday. Unfortunately its tail rubbed through the trace next to the boat.

There was nothing bad you could say about the weather yesterday as we enjoyed a seemingly perfect, final glamour-weather day before the winds come through today. Storms came through on land in the afternoon, but it didn’t reach us on the reef and couldn’t spoil the glass out conditions.

Up at Number 10, Capt. Dean Beech on Castille III had a ripper day fishing yesterday! He released a 400lb-er and another big girl that Capt. Dean put at 950lbs, and also chafed through the leader of another fish after 25 minutes that he put in the 1100lb range!! Capt. Dean also reported that Capt. Bobby Jones on Iceman also released a big fish over the mark. Well done Bob! I hear there is video footage to come so we look forward to seeing that!

At the other end of 10, Capt. Tim Richardson on Tradition went two from three on smaller fish while things went a bit quieter in the middle. Unless you were on Little Audrey that is! Capt. Daniel Carlson and his team must be off to buy a lotto tickets when next in town. Capt. Dan just keeps them coming one after another adding another 4 fish to their already impressive season tally yesterday fishing at Number 4 Ribbon Reef at 300, 200, 200 and 750lbs. Dan said that Brady has been getting in the water with some of the fish (!!) and has some great footage to share soon. The boys celebrated their day by watching the Kiwis flog Australia in the Rugby Union….not! (At least we got them back in the Rugby League though hey!)

Askari hooked up to a nice fish on Number 5 when we arrived and the boys from the Sunshine Coast on Kamikaze also released their first black marlin of the trip. I got a couple of photos of the action from far away (one below). She pumps a bit of black smoke and with the lack of wind, it just didn’t go anywhere. But you can see the marlin in there! 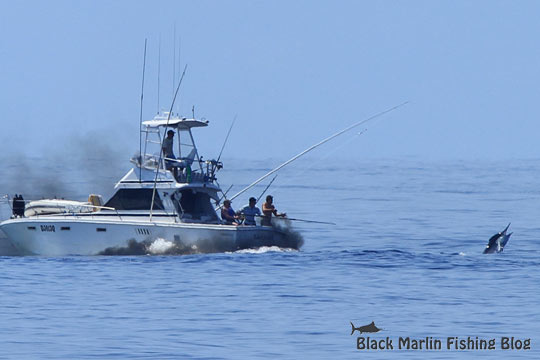 And the Gold Coast boats enjoyed another great day on the water yesterday finding the blue marlin still in residence.

In other news, I think I won the race to get my first full fish footage edited and can I just say that Jason Hassett’s 1000lb black marlin on KEKOA video would be appearing here right now if the internet would stay connected! I will put the link up on the FB page later today once I can get a steady connection and have it on the blog for tomorrow’s report so lookout for that. If anyone else has any other finished clips to share, please send me the link by email.