This is it: Port Stephens 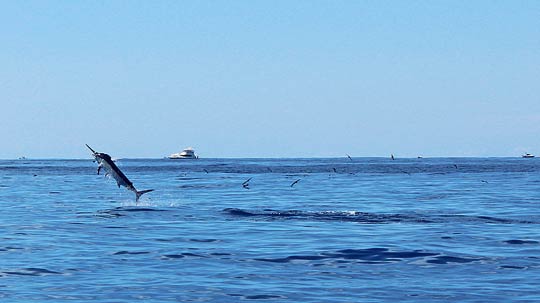 The biggest weekend on the Port Stephen’s tournament calendar is about to start with Day 1 fishing of the NSW Interclub on tomorrow.  And the marlin fishing over the last few days has been no less than outstanding.  Capt. Dean Beech on Castille III has had a fantastic run this week tagging 21 stripies in three days fishing (7 on Monday, 8 on Tuesday and 6 on Wednesday).

Yesterday they added a marlin grand slam to that total with a black marlin, then a blue marlin and finally a striped marlin, all before lunch!! This was angler Mark’s first grand slam and the team also added another stripey to make it four for the day. Interestingly they have been fishing in the same spot all week and had caught all stripies there until the black and blue yesterday.

Calypso also had a red hot day’s fishing yesterday with 8 tags and the Cairns boys visiting tell me they went 4 from 5!

Andy sent me this beautiful shot taken on Fritto 1 that kind of sums up how its been down there.  Bait shimmying on the surface, birds everywhere and marlin jumping non stop!

Good luck to everyone competing!