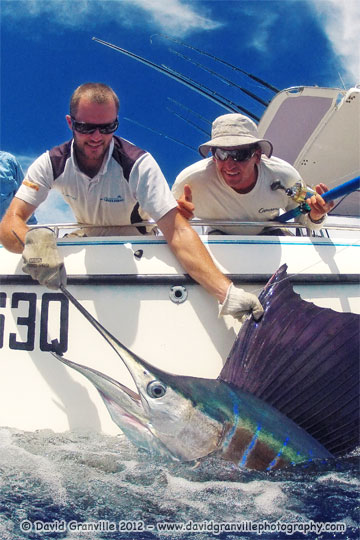 Another great photo from David Granville, this time of a sailfish beside the boat (Reel Capture) before release.  Great shot and beautiful colours!

David tells me that after the hot fishing off the Sunshine Coast on Saturday (report below), Brent Higgins, on his 20ft centre console Walk the Line, was one of the few to brave the weather on Sunday. Brent caught 2 from 6 black marlin in just a few hours fishing which included 2 double headers. With more than two of those hours fighting fish, it was pretty busy! The weather sent them home early, but Brent says it looked unreal out there again and that obviously, there a lot of fish there. With the weather unfriendly for the next few days, crews will be looking forward to getting back out there when it clears.

Meanwhile, further to the south, Ben Colvin reported three from four on Sunday on Zeus on their return trip home from fishing Port Stephens between the Coffs and the Tweed.  Ben says they trolled for a total of 9 hours over the 2 days and in total had 9 bites, hooked 6 and got 4 (‎1 from 2 on Day 1 off Seal Rocks) including a first billfish for John. They also lost another right at the boat. Out of the Gold Coast proper, Vince is still plugging away at the blue marlin on Barco as well. They added another 2 from 4 blue marlin on Saturday. Vince says that there were plenty of dolphins and bait around and the 200 metre mark was the place to be.

While Zeus had good fishing off Coffs Harbour with two of their blues there, Rick says that Solitary Islands club boats fishing the club comp day found the conditions on the shelf pretty tough (with the added southeasterly chop). The current had also completely stopped, and the water was patchy green. As it happened, there were acres of flying fish working the clear patches of water, with striped tuna in large numbers below, and marlin under them. It should have been better, but it was very quiet, the fleet only going 4-2-2 all day. James McGinty went back and forth over the same active area of the shelf all day with Alcatraz, and that tactic eventually paid off when he got a 100kg blue marlin up. The fish didn’t jump at all, came to the boat without much effort, and made no fuss as it was tagged. Black N Blue had a similar shot, with a similar result. The other two fished raised took a lazy swipe at lures and then went on their way without a glance backwards.

Once the current starts flowing again and the blue water sweeps back down the coast, Rick says they will see a new push of fresh fish running along the shelf, and things should pick up back to normal.

If you’ve read all the way to the end of the report, now I’ll get to the “on-the-go” part. We’re currently underway from Cairns to Lizard Island and onto Princess Charlotte Bay in the next few days. It’s unlikely that we will get phone service there, and so there may be a lull in reports from Wednesday (for a week) while we are there.  I’ll post up a note before we go out of phone/internet range so you know when that starts. Lets hope that by the time I’m back, there’ll be plenty more good fishing to share!