Townsville GFC President Stav Bogiatzis tells me that Bowling Green is really beginning to live up to its reputation this year.  Club boats have been recording plenty of little black marlin action over the past few weeks.  This weekend a few more took advantage of some good weather to get back down to the grounds including the newly relocated Maverick (ex-Spartacus) on Saturday who released two black marlin and one sailfish from 7 raised and raised a whole bunch more on Sunday.

Other reports from the weekend are still filtering (to be confirmed and I will update as I know more) in but I hear that the Nicolosi’s club boat Zuri finished with two black marlin tags for the weekend while Princess C and the lads on Screamer had a top day yesterday with 3 tags each.

The season doesn’t usually fire until August so here’s hoping the reports keep coming in all the way through.  All in all its shaping up very well for the Mike Carney Billfish Challenge (August 31).  Some photos from recent trips below with more to come from the weekend. 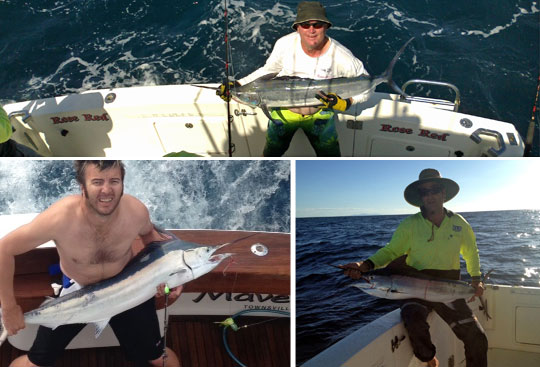 I also received a report from Jim McKinnon whose Galaxy 11 fished east of Cape Moreton on Saturday (for only three hours due to the poor weather conditions) and went 3-3-1 on blue marlin with junior angler Ryan McKinnon tagging his first small blue estimated at 160 pounds (and a wahoo). Congratulations Ryan!

And lastly, the video from Mistress‘ 7-4-3 blue marlin day on the Gold Coast is below. Thanks to Daniel from Larva Lures for sending that in.