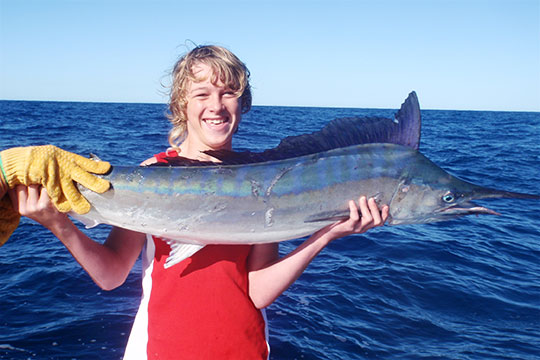 Thomas, very happy with his first (and second) black marlin on Sunday on Midnight – well done Thomas! Read the previous report for more from Midnight’s 10-7-4 day on Sunday.

Meanwhile on board Zuri, Jack Nicolosi reports: We punched out to the grounds on Saturday with the conditions being ordinary but with high expectations from last weekend (as well as the report that TGFC boat Viagra had tagged 3 that morning!)  We got our first hook up around 11 with Dad (Sam) getting his second marlin with myself at the helm again. The marlin was the typical little fish around 10 kg and was very acrobatic and was quickly released. Soon after Alex hooked up again to marlin around 10kg, while this fish was far more subdued than previous fish, it still provided us a bit of entertainment with a set of nice jumps at the back of the boat. Soon after the last fish was dispatched we were again hooked up staying connected to one from a double, again the fishing was very quiet swimming towards the boat  – unlike last weekend when they were charging us. This was a smaller fish again, around 7kg, and was quickly released sporting a tag.

We were kept busy for the rest of the afternoon with constant strikes from marlin occasionally losing one close to the boat, making the final stats 9-5-3. With the wind dropping out Sunday, we again headed out to find the marlin but failed in enticing a bite with the fish being reluctant to hit the bait, only having half-hearted attempts at them. At the end of Sunday the stats were 6-1-0.

The weather stayed calm for Monday but with the wind swinging directions and cooling the water a little, the fish were a little harder to find eventually heading home without seeing a billfish for the day. Even with the lack of fish on the last days it started to feel like old times with boats rafting up on both nights, all in all it was a great weekend!

Thanks Jack for the report!

Other Townsville results from the weekend from Viagra which has spent a few months on the trailer and made it back on the water just in time.  Skipper Rob Vearing and mates Bede ( Bags) Price and Clay Pearceover went 8-8-6 over the three days. Fish Hard also reported 5 from 6.  According to the club there were reports of around 50 strikes for 20 tagged and released fish.  Its is great to see this time of the year leading up to the Townsville Billfish Tournament in 8 weeks!

Meanwhile, off Cairns, Mark reports a great day off Oyster Reef on Sunday as well.  Fishing on Spreadem, they went 6-5-3 on marlin and sails with the one sail from a double header (lost the other at the boat).  The rest of the bites were all from juvie black marlin  in the 10-12kg size. Mark says that nearly all the bait they found produced a bite or had fish marking.  Good news for the light tackle season in Cairns as well!

And back at Weipa, Ben “Notso” Bright and partner Kristy on Last Cast took advantage of some nice weather Tuesday to head back out to the grounds. Although Ben found that the water condition had deteriorated, they still managed to raise two sailfish and release a 70kg black marlin. Ben says they also saw another smaller black.

And some more photos below from Michelle from the recent Predators Comp (also from Midnight). 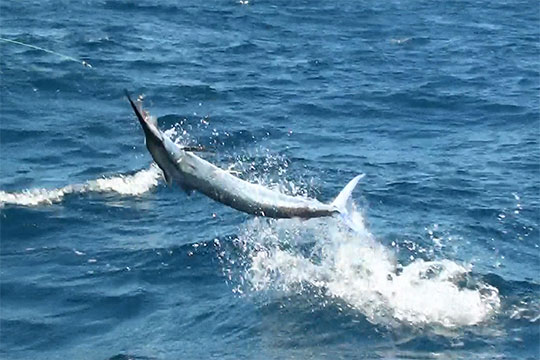 Jumping black – via Michelle on Midnight from the Predators Comp 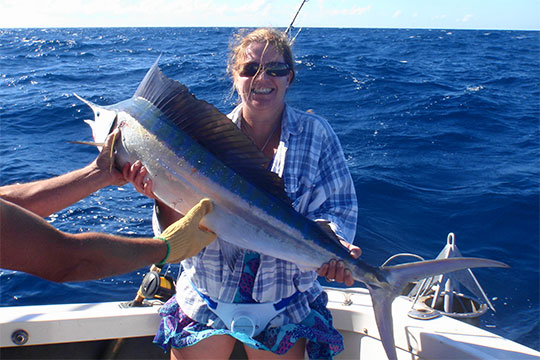