The Southern Bluefin Tuna bite continues off all points south including Jervis Bay, Ulladulla, and Batemens Bay with the fishing reports streaming in. But the hot bite for the big fish right now seem to be all off Sydney. 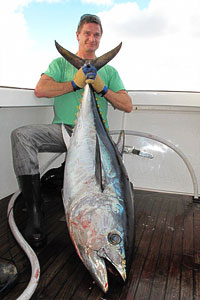 Charter boat Reef Magic was on the fish again with a 5-5-4 on the weekend including a 100kg+ fish on a Stella! Another Sydney boat Grommit also got three to 70kg.

And Mickey tells me that Steve and Macca had a four way hookup and even with only the two of them on board managed to get all four fish (and the biggest went 72kg)!

On Monday the bite continued with Reef Magic adding another 5 for their clients between 35kg and 70kg and let countless go. The fish were caught on skirts, jigs, poppers and stick baits.

Rob Curry on the Botany Bay GFC boat Marquis was also in on the action on Sunday losing a big fish they put at around 120kg at the side of the boat. They made up for it on ‘Mad Monday’ boating three excellent fish to 70kgs.

Thanks Mickey for all the details!

Australia’s only representative in the annual Blue Marlin World Cup sadly struck out for the July 4 event. While Nitro Express raised two blue marlin and successfully released a striped marlin and boated a yellowfin, only blue marlin of 500lb or more qualify for the event which is fished between the hours of 8:30am and 4:30pm on July 4 all over the world in each boat’s time zone.

Only two qualifying fish were weighed with all smaller fish released. Congratulations to the team on Queen of Hearts.