Well the Townsville Tournament is over for another year and with the return of the juvenile blacks to Cape Bowling Green came a return of anglers with a bigger tournament than we’ve had in a few years. And a very fun time had by all!

While the fishing slowed over the last two days, an impressive 160 odd billfish were tagged over the four day competition.  And while the weather on final two days kept a few of the smaller boats off the water, 2012 was certainly a year for the Under 8m category. The 7.5m Mojo left the rest of the fleet in their wake with a flying start, tagging their 21 billfish in the first two days (and then not adding a single fish on Day 3 or 4.) While the eventual U8m runner-up,Yanmar added 3 on the first sked on Day 4 to take their total tournament tally to 10 (with one day to drop).

In the big boats, it was a battle between the two latest O’Brien Boats with OB1 and KEKOA exchanging the lead between them throughout the event. But an early tagged sail to Andrew Mead on Day 4 converted it for OB1.

This year was the 30th anniversary of the tournament and I received a few historical pics and factoids from some of the club’s life members (all 7 of whom were in attendance last night – Peter O’Brien, Russell O’Brien, Jim Dalling, Tom Hatrick, Mick Miers, Mark Parkes and Calvin Tilley) which I’m sure many will also find of interest. 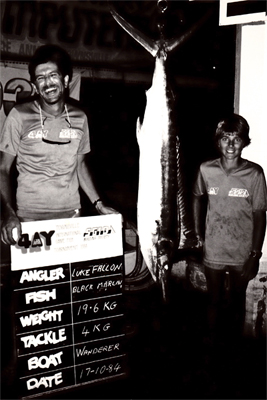