Big weather continuing on the reef with only the very keen fishing yesterday – and many others opting to stay inside the breakers. The only report I had was from Biggles on Calypso who released one from two on the small fish for his guests up the top.

A catch up report from Capt. Steve on Hellraiser who went 1 from 3 the day before. 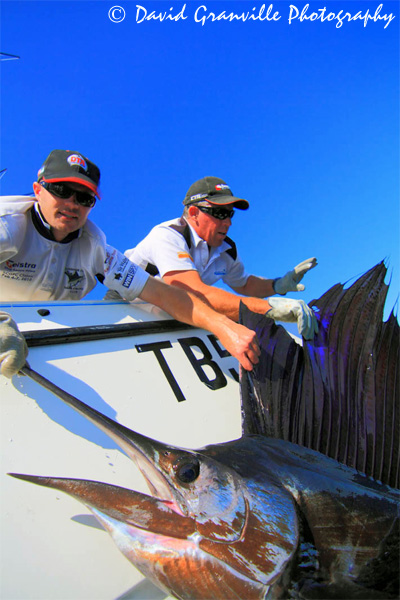 Seems like there are plenty of the small blacks now making themselves known down the coast.  Bite Me Marlin Charters Scott Coulter’s tells me the Yeppoon our season is going well with plenty of small marlin and the odd sail been caught over the last few week  (despite the water temp in close of a cold 14c!). On their last trip they went 6-4-3 for client Angie and family on board Pacemaker.

Further south, I heard that the top of Fraser absolutely ‘went off’. If anyone has a report from there, please email me. Also the Sunshine Coast’s Spring Shootout was held over the weekend (with a tournament report to come.)

Not fishing the comp, Reel Capture released this sail. Another awesome shot at the side of the boat from David Granville.