More big ones in the middle

I didn’t get to update yesterday’s report as hoped – the telephone service gods keeping me in the dark until we reached the bottom of Number 10 Ribbon Reef yesterday afternoon.

To catch up: Capt. Corey Hard on Askari has been having a blinder for the past few days.  Corey tells me that on the last day of the tournament (Saturday) he caught two fish, one at 500lbs and the other he estimated at a massive 1200! Sunday, he followed up with three fish to 500lbs and then again yesterday with two to 500lbs.

Capt. Chris “Sharky” Miles on Kanahoee released a one yesterday while Capt. Brett Thomas on Gorilla fought a big fish on Sunday but unfortunately it was not to be.

Capt. Haydon Bell’s Release has been picking away with a fish a day including a couple of nice ones at 600 and 900lbs.

We fished down Number 10 Ribbon Reef yesterday to find the water had improved considerably since that tournaments end but the fish were still seemingly absent along the biggest stretch of reef. Capt. Jim Dalling on Absolute came across some tailing but they had other things on their minds!

Back on the reef and riding along with Stephan from Germany who is fishing with Capt. Tim Richardson this week on Tradition is Aqua Paparazzi photographer Scott Kerrigan. Scott’s camera is permanently attached to his side and as always he’s been getting plenty of great pics capturing not only the fishing but the beautiful environment and lifestyle our clients enjoy here on the reef. Scott took this picture of us (KEKOA) anchoring at sunset last night on Number 9 Ribbon. 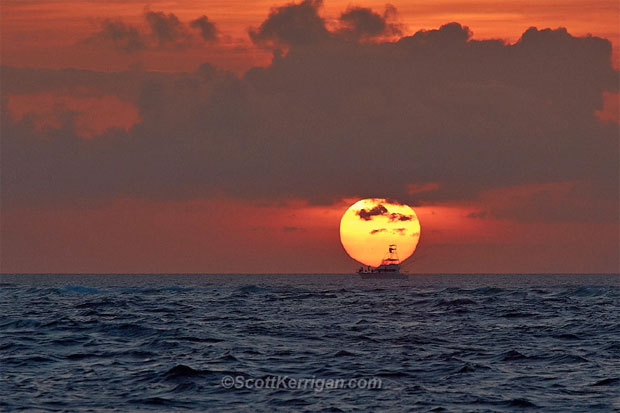