More wide marlin in the north

The tuna spread further to the north yesterday with the main congregation harder to find, but there were still marlin bites amongst them.

Capt. Daniel Carlson on Little Audrey fished his final day of the Cairns season, finishing up with two fish at 250 and 350lbs. They started the journey to Airlie Beach last night and will travel via Myrmidon Reef of Townsville for a quick fish. Look forward to hearing how they go there.

Capt. Kim Andersen on Reel Shock went 1 from 2 with a 550lb-er. Capt. Luke Fallon on KEKOA put Colin onto his first marlin at 400lbs (below) and we’re still trying to wipe the grin off his face. We also had two more bites that didn’t hookup. 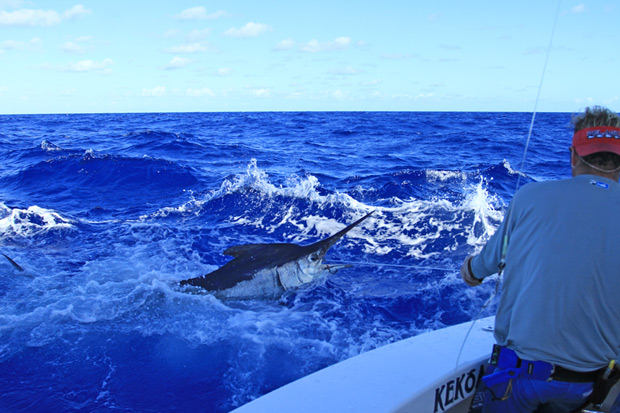 Capt. Haydon Bell on Release stayed on the edge and went 1 from 2 on smaller fish.

Reg tells me that My Space Too also went 2 from 4 yesterday with one caught in close and one out wide and 3 of the hookups on lures.

Also finishing their Cairns season, a catch up report from Luke Darby who was fishing with Ben and Casey on Levante.  They finished up their season on a high on Monday with three from four at 850, 300 and 200lbs.  This is a shot of Ben on the leader of the 850lb-er for Luke. Great way to end the season! 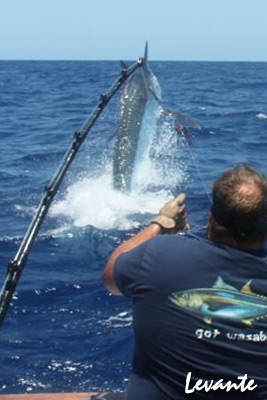 Meanwhile over in Weipa, Gavin “Groover” New reports two from two marlin with Lloyd in his 19″ Grady White. One of the fish was estimated at 300lbs and gave them a tough 2.5 hour fight on a Calcutta 400 baitcaster!