More weekend reports are pouring in as the ‘Summer of Fun’ continues:

More pics from Capt. Steve on Hellraiser who is still fishing up on Number 10 Ribbon this time. The underwater shot is from his big fish last week where you can clearly see two smaller marlin swimming with it, while the one on the right is their one from one at Number 10 yesterday.

David Trask on Big Business fished the shelf east of Cape Moreton Sunday andwent 1-1-1 on blue marlin about 450lb. David says that he was on the deck changing lures while everyone else was asleep at lunch time. Right on cue (as you would expect) the fish came up and attacked 3 lures the last of which was Davis’s on shot gun. David had a very empty spool by the time he woke everyone and cleared the gear.  With decky driving, a novice on the tag and leader wrap did quite well until the fish went burko on the leader (after the tag was in!).

David said they finished up a great day on light tackle with a mixed bag of Wahoo Tuna and Cobia at Hutchies.

Another report from off Cape Moreton, this time light tackle from Andrew Turner on his boat Game Day (Caribbean 35). Andrew reports they finished up 3 from 5 for the weekend.  They fish with Dan Draper and the boys on Fido (7.4m AMM) who went 4 from 7 and had a blast!  Another great action shot from Andrew – as always, great to see the fish in the water! 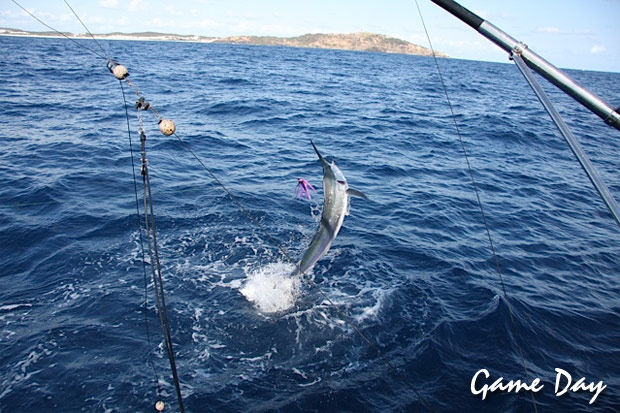 More on light tackle – Lachlan sent me the Youtube clip from their weekend on Cat-a-pult.  Great jumping action showing the energy of these little guys with some cool underwater at the side of the boat at the end. 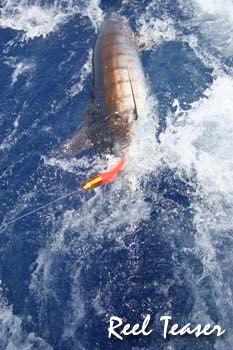 Reel Teaser’s Capt. Ross Newton just got back from Rowley Shoals where they have enjoyed another trip chasing blue marlin. Ross reports that they fished out there for 5 days and raised 20 marlin, had 18 strikes, 13 hook ups and tagged 6.4 blue marlin and 2 black marlin.

The largest Blue was estimated at 150kg, while the others were all around the 100kg mark. The blacks were between 40 and 60kg. Ross said they saw some bigger fish but they didn’t play the game. It was a great trip, weather was good and its good to see plenty of fish out there!