In David Granville’s report below from little black marlin fishing off the Sunshine Coast on Sunday, he mentioned that two of their five tagged little blacks were recaptures. Well, he already has the information from their first captures which is both pretty exciting and most interesting.

One of the fish was originally tagged at Fraser Island aboard Kamikaze in October. You’ll remember their amazing Fraser trip (67 in 2.5 days – read about it here if you missed it.

The second fish was originally tagged just the day before (Saturday) aboard Bangalee, in the same spot Reel Capture caught it!

Here is some more recapture information from the northern little black marlin season if you are interested in reading more. 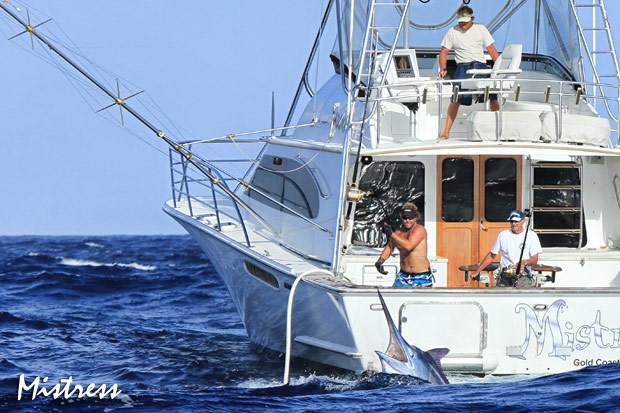 Barry’s first experience of Big Game Fishing was at the Bay of Islands, New Zealand in 1965. Since becoming ‘hooked’ he has fished in numerous international locations including, Kona Hawaii, Bermuda, Bahamas, Papua New Guinea, Maldives, Mauritius, and Fiji.

Barry notes that the only billfish species he hasn’t yet caught are the Atlantic sail, and swordfish which he intends to rectify next year in Miami, and Islamorada respectively.

Barry joins the growing list of Australian’s who have been recipients of the award which also includes Halco Tackle’s Neil Patrick (last year), Lizard Island GFC’s Bob Lowe and Cairns Season veterans and Captains Laurie Wright and Peter Bristow who is now based in Madeira. Its already been a big year for Barry as he was awarded the Dawn Earle Trophy for Champion Angler overall Tag and Release, QGFA 2012 this year as well.