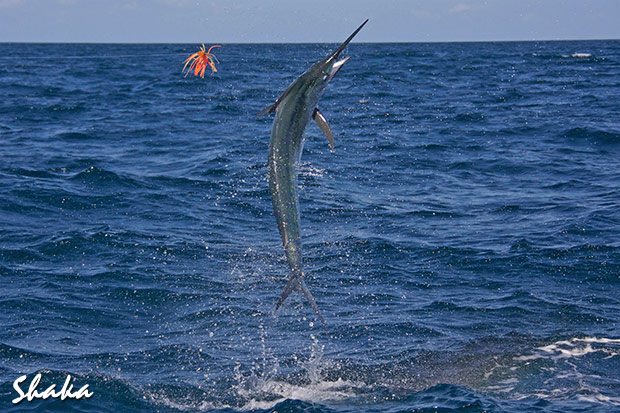 Capt. Jared Weir on Shaka sent me a catch up report from the weekend on Shaka off the Gold Coast.  Jared says that they fished with angler Scott Woodford successfully releasing his first black marlin off South Stradbroke Island (aerial shot above).  With crew Capt. Brent James on deck for the day, they ended up 2 from 3 bites.

The 2012 HT Tournament is underway and I hear that the boats are battling less than favourable weather making them work for every single fish!

On Day 1, 15 marlin were tagged. Day 2, another 26 marlin raised for 11 tags. EGFC Club Manager Leith Holtzman reports that The Bear currently leads with 5 tags with 4 other boats, Winora, Black Marlin, Pelagic Hooker and My Vice II close behind on 4 tags.

While a couple of fish have been around the 200kg mark, none have been weighed.

I also heard from Capt. Tim Richardson on Tradition who has just heard from the Billfish Foundation that he has received the Top Tagging Captain Pacific Black Marlin gong (for tagging the most Pacific black marlin with TBF tags) once again. Tim won this previously in 2006. Congrats Tim!