Back to Tanga 5 Tournament Report 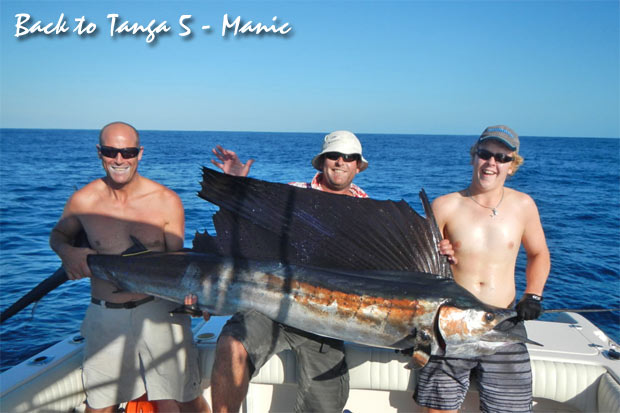 The MBGFC Back 2 Tanga 5 Shamrock Civil Tournament was run over the weekend 16-17 March at the club’s Tangalooma Camp grounds. Seventeen boats registered with 53 anglers and 17 crew. The weather came good and on Friday it was blowing 15-20 knot SE, with blue skies and was very fishable. A number of larger boats including Megumi, Sun & Moon, Mighty Tonka all headed wide to the Moreton canyons chasing blues, whilst rest of the fleet worked the light tackle grounds between Mooloolaba and the Cape.

Unfortunately, it was a relatively quiet days fishing with no billfish caught, but a number of other gamefish landed. Anna Markey, fishing on her father Terry Russell’s boat Makaira, a 43’ Riv on its shakedown tournament, landed a potential Ladies Australian and World longtail tuna which on the scales weighed 25.5kg on 8kg line. Unfortunately the fish was just 100 grams short of the long standing Olga Mack’s record set in 1992!

On Saturday the weather gods shined with a 5-10 knot breeze SE, blue skies again and a few sore heads after Friday night festivities, the fleet again split going both heavy and light tackle. In the better conditions five billfish were tagged and released, including a blue to Debbie Dahl on Bring it On, small blacks to Anna Markey and Daniel Draper on Makaira, a black for Bol Molner on Aussie Hooker and a huge sail on 8kg to Cameron Spence on Manic. The sail was estimated over 70kg and hooked in 110m of water and took over an hour to land. A potential Australian record, team Manic decided to T&R and let this magnificent fish go (a video of the capture is on the MBGFC website). Photo above.

Saturday night was a big party night with a great feed of fresh cooked Thai curries, cold beer and the 5 piece band Doris belting out old favourites. Sunday morning was presentation where the winners were:

Congratulations to all who competed and a big thanks to Nick Currey for the report!