Many of you may have already heard whispers of a pending new women’s world record blue marlin caught off Kona this week. At 958lbs (on 130lb tackle), it was an amazing achievement for Sydney GFC angler Alex Nuttall who was on the final day of a three day trip with boyfriend Nick Durham, fishing with Capt. Chip Van Mols on board Monkey Biz (www.konagrander.com).

Those who fish Cairns, and of course local Sydney crews, will know Nick who we remember up here as Tiny from his days on deck on Iona 2. Nick, who is also the owner of Tantrum Lures, sent me this wrap up on the action. Its a great story so give it a read. And a big congratulations to Alex, Nick, Capt. Chip and JD from all of us! 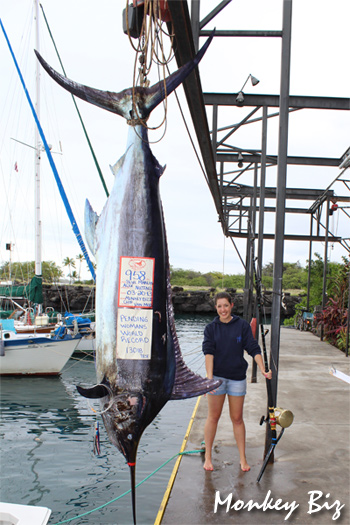 “My girlfriend Alex and I had fished with our friend Captain Chip Van Mols on our last trip to Kona two years ago and had come back this year to have another crack as we knew this time of year produces big ones there. Kona is a special place to me as I also make Hawaiian style lures and am mad about blue marlin fishing so couldn’t wait to get back there to mingle with the best blue marlin captains and crews in the world. We had scheduled three days with Chip on the Monkey Biz II. We’d had relatively quiet fishing on the first two days with only the one bite from a 200lb fish that we pulled hooks on – little did we know what we were in for on our third day.

The final day started our with nice weather but it turned quiet nasty around midday with a 20 knot SW wind, sharp wind swell and torrential rain – unusual for Kona waters. We’d made the call to start trolling for home but then the wind backed off significantly with the rain and Chip made a turn offshore straight out the front of Kailua town. Alex had actually become rather sick and had her head in the toilet bowl when it all happened. I was standing in the doorway of the saloon with crewman J.D. Hudson trying to get some shelter from the rain while still watching the lure spread. We were both lucky enough to have turned our heads towards the spread when the fish ate the short rigger with a ruthless body-out-of-the-water inside-out bite on a down sea run in 750 fathoms. I can’t repeat what my first words were, but it was quickly followed by “Alex get out here!!!” She quickly snapped out of her seasick state and manoeuvred the 130 to the chair while J.D. and I cleared the remainder of the spread. Chip had unfortunately missed the bite and I’d suggested to him that the fish was well over 500 (not realising how conservative I was being) and asked if we should tie off the gaffs. He said that he wanted to take a look first and when the fish did its first series of jumps the call was made to tie them off as he was certain the fish was up there around the mark.

With some exceptional driving from Chip we never actually had the 300m top shot off the real and the fish was always close. What we weren’t expecting was to get a shot at it inside ten minutes of hooking up! The fish was black backing away from us and Alex was up on the button with around 45lbs of drag at this stage and gaining well when Chip snuck up on it and got the leader to J.D. who had to be careful as the leader was only 450lb and the hook a 9/0 (very beefy Hays hook). The fish was coming up easy on leader at first with J.D. just pinching it up then laying some nice wraps when it began to pull a little. The fish was coming up and Chip was in full rack reverse and had the fish off the starboard side for a classic Cairns style going away shot. At full reach I was able to sink a shot in the fish, then the fireworks really began. The fish exploded as soon as I hit it and took up all the rope well before I was a chance at hitting the cleat. J.D. got ripped around the cockpit and Chip was still driving on the fish with it on the flyer. Reports from nearby boats suggest that water was being thrown over the top of the fly bridge by the fish’s tail and wire man, gaff man, angler and skipper were all drenched in the process. I was eventually able to get a solid wrap on the cleat and she was still throwing buckets of water with her tail out of the water unlike any blue marlin I’ve seen on gaffs, I’d only ever experienced this with big blacks. Unfortunately the fish ripped a massive hole in its side and ripped the gaff out before we could get a second one in it. So the fight continued…

Chip told Alex to put as much drag on the fish as she could handle and she upped it gradually eventually going to sunset as she got used to the feel of it. We had the leader another six times and J.D. did a fantastic job and showed a lot of patience with the relatively light leader by knowing ‘when to hold em and when to fold em’. The fish was never any more than 30m away for the remainder of the fight but was still very green and was black-backing for most of the fight, not tipping over on its side like a lot of them do when they’re getting tired which was amazing considering the massive wound on its side. Chip pulled all his tricks out and kept the fish guessing which gave us those extra few shots on the leader. Eventually the fish started to tire. On the seventh time we had leader J.D. was making some good gains and was able to begin lifting the fish within gaffing range. I was able to get a shot at the fish down deep and luckily sunk it deep in her shoulder. I then heard Chip’s footsteps behind me and he came through with a second shot and got the half hitch on the bill and welcomed her aboard. We were obviously ecstatic at this point and it was hugs and high fives all around. Chip was pretty confident it would go with its short length being the same as his last two granders, it just didn’t have the tail girth we were looking for so we couldn’t be sure. We were also mindful of the possibility that it may be a world record and got in touch with IGFA rep Rick Gaffney who indicated the current record was 950 (Mauritius 1994) and we were confident this could knock it off. The scales read 960 and we were all celebrating (even though it didn’t go over) the fact that we may have the new women’s 130lb Pacific Blue Marlin world record. The reading was not photographed initially and we had to re-weigh it at 958 (no big deal as it hadn’t lost much). Needless to say a big night of celebrating was had and we still can’t believe it happened!!! It all feels surreal.”