Another Day, another record: Weipa billfish and record on fly 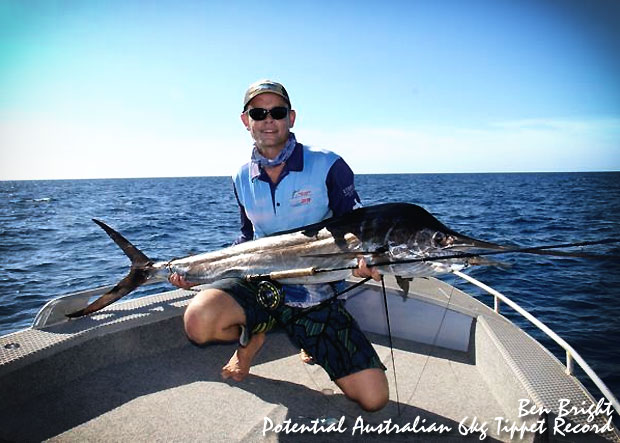 Another great fishing report, this time from the NQ West Coast (Weipa) and on board Ben Bright’s Last Cast yesterday.

They finished the day with 5, which is a great result, but actually belies the quality of the fishing!

Ben says that it was absolute mayhem from start to finish and every time, he was hooked up, so was his fishing partner! Starting with a double header just after lunch – a sailfish and 20kg black marlin – he decided to give the Australian 6kg tippet (fly) record a try.  After the 3rd attempt, the right fish ate the fly and just over an hour later, was boated. It later weighed in at 15.6kg and a record claim will be submitted (the existing is 10.7kg).  Photo above.

While this was going on, they lost count of the number of pods of fish free feeding on sardines on the surface. At one stage, in a 5 minute period, they saw at least 3 different free jumpers – even 2 at once! By late afternoon (it was very hard to leave) they had raised another pod and got another double header and meanwhile kept the teasers in water at back of boat just watching another 5 or 6 fish chew on them.

As can imagine – they are back out there today!!