The marina is filling with teams ready to compete in the Mike Carney Toyota Billfish Challenge which kicks off with the briefing tonight and fishing tomorrow. And a few teams have also been enjoying a little per-tournament fish this week in the relatively calm conditions (yes of course, the forecast has it coming up tomorrow) including Castille III who released this one for owner Mark Ripper (above) yesterday. 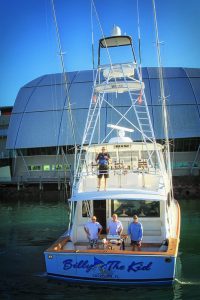 Capt. Jim Dalling who is running the US boat Billy the Kid also enjoyed the day on the water yesterday with a 5-4-3 on the black marlin.  Capt. Jim said that the fish were all size ranges, estimating them at 6, 10 and 15kg (small, medium and large). They also raised two sailfish that wouldn’t eat.

Good luck to all teams who are competing!

And in the better late than never category ;-), Conor has put the finishing touches on his Cairns 2012 season video from on board Kaizen.  Worth the wait – check it out below.