The big report out of SEQ after the weekend was from Ben Colvin who was driving Stephen Dearnly’s Piscis with Graham Mcloy and Wayne Mckay overnight Sunday/Monday at the sea mount off the Gold Coast and went 11-8-5 on billfish (including a shortbill). Graham (who we all know from Game & Leisure boats) even got behind the sticks on 1 to prove that he still has the knack of driving on them and Ben says he hasn’t lost any of his touch at all!

Among the 5, was one blue marlin that they put in the 600lb+ range and they also lost another nice blue after a few minutes of some of the craziest runs any of them had ever seen.

Ben also reports 2 sails and a nice black marlin off Mooloolaba on the days prior on the way to delivering the Gypsy (previously known as Cool Runnings) to its new home on the Gold Coast, straight lining on the way through! 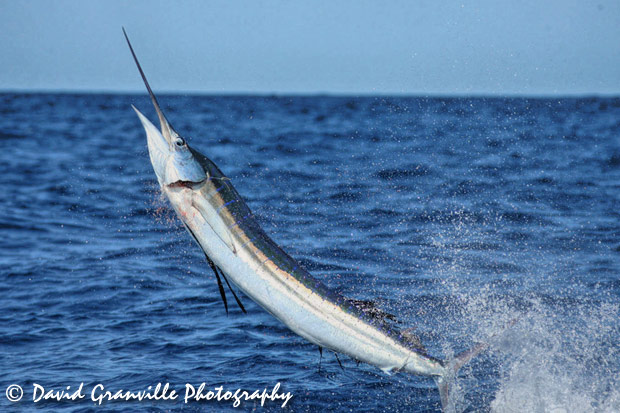 Photo from David Granville of his one from one sails on the weekend as I hear that more Sunshine Coast boats have been reporting encounters in the lead up to the Spring Shootout early next month.

Back up in Cairns and further north

Capt. Kim Andersen on Bounty Hunter released a 250lb black marlin at Number 5 Ribbon on Tuesday.  Leaving Cairns for his first heavy tackle trip on Monday they warmed up with some GT action at Ruby Reef before putting the big rods out.

Capt. Craig “Sparra” Denham is on route back to Cairns with Black Label and has started his heavy tackle season in NT waters after departing Darwin and arriving into Thursday Island on Tuesday (as opposed to Thursday…..;-)  Along the way they released a 400lb black marlin on 30lb tackle, as well as a sailfish.

Capt. Ashley Wallis on Kalira fished yesterday out of Cairns on light tackle and released two little black marlin for his guests.

Several more boats are beginning their 2013 seasons today and so expect more regular reports from this point in.

Meanwhile off Sydney I’m hearing about several more blue marlin this week if anyone would like to send in a report?