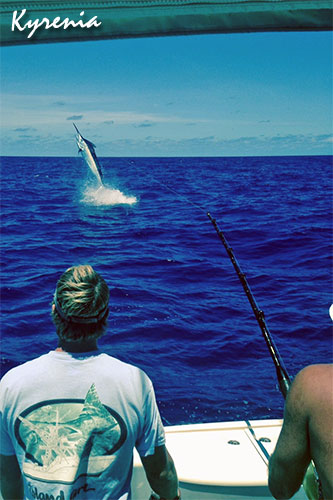 The Port Douglas Marlin Challenge wound up yesterday with the final day’s fishing in the four day event. While the team on Above Grade, were able to cement their lead with a fish in the middle of the day to bring them to three tags, there was a late run of fish to keep the other placings in the air until the very end.

Above Grade‘s fish was another solid model at 500lbs for Lisa Goodwin which also gave her the Champion Angler award with three tags for the event.

Capt. Laurie Wright’s team on Think Big started the day in the mix on count back with one tag but added two more on Day 4 (including one with minutes to go until cease fishing) to give them the second placing while Althaldo also added a tag (their second fish) at 750lbs to Josh to put them in third. Chamois Free was the other boat tagging for the day.

There were also a few nice fish that weren’t point scoring for the tournament.

Capt. Damon Gruzdev’s Kyrenia was the first boat reporting ‘hooked up’ and fought a big fish for well over an hour before calling in the fish was caught, but self disqualified. Unfortunately the fish ate two baits (picture above). And Wild Turkey was also fighting a nice fish for a while that was unfortunately lost.

Outside the tournament not much to report with the exception from right up the top off Lizard Island with Watersport’s Ross telling me that Fascination III has been enjoying a lot of diving and snorkelling charters recently but yesterday afternoon we had the opportunity to get back to some heavy tackle releasing a fish they put at 650lb on number 10 for Christine Williams’ (Watersports Assistant Manager) dad Owen who is visiting from New Zealand – photo below.