Catch ups from Townsville and Cairns

Catch up report from the reef – my apologies as I may be out of range again tomorrow too!

Capt. Ian “Wobbles” Ford on Hot Shot released a smaller fish at the Light on Tuesday, while the word is that Capt. Russell Caphorn on Kaizen had the pick of the day releasing 2 from 3 at Number 8 Ribbon (catch up photo from the last trip from Michael Kelly below – thanks Michael).  Joining him at Number 8 a few boats yesterday for not much at all with the exception of Capt. Tim Richardson’s Tradition who released a small fish for Brady. While down to the south off Cairns, it was quiet again with just Capt. Brad Craft’s Castille releasing a nicer one that Brad put at about 700lbs and Capt. Bobby Jones’ Iceman releasing a smaller fish that almost climbed on board for a looky on his way back into town. 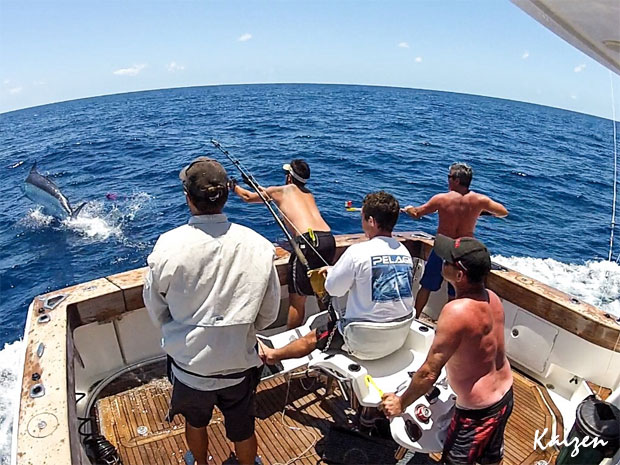 The club had seven boats head out to produce three tags combing of two sails and a black. On Zuri the Nicolosi’s tagged one of the sails about 40kg at Faraday (for Jack) which was the unlucky one of the pod as it ate the feather with a 5/0 hook and somehow managed to stay connected before receiving a tag. Later in the day they had two fish up in that 100-150lb range. One took 2 ½ minutes to get a bite out of (giving us plenty of time to get the pitch bait out from the bottom of the kill box to feed back to him which he ate, but Jack says the leader must of wrapped around the bill pulling the circle out of him wrong) and the second smaller fish wasn’t able to break the bands and pull the bait out of the clip.

Maverick was the other boat to tag a sail wide of myrmidon which they called at 45kg, this one however took a proper pusher on the shot gun and was quickly tagged.

Other boats to raise fish but not get a hook into them was OB 1 who had a 400lb up on the Saturday, Silverback who had a rat fish about 150lb come up and hit the baits in a similar way and Reel Crazy had a fish up on Sunday in that 150lb range again that refused to bite. Third boat tagging was Maximus.

Beside marlin there where a few dolphin fish and dogtooth around as well as other critters, however there was a lack of yellowfin around in comparison to previous weekend.  In all whilst frustrating a pretty fun weekend was had by all.