There was a total of 175 anglers, including 19 juniors and 28 out of town anglers fishing on 54 boats – These are all record numbers for Ribbons!

A total of 7 bill fish were tagged and 105 game fish weighed to qualify for points.

This year we presented for the first time the Jack Erskine Memorial Junior Encouragement Award, a sign of our respect and admiration for Jack and all that he has done for fishing in Cairns. This is now an annual award. The recipient in 2013 was Morgan Brown fishing on Bounty Hunter.

Thank you to Sharon for the official results! 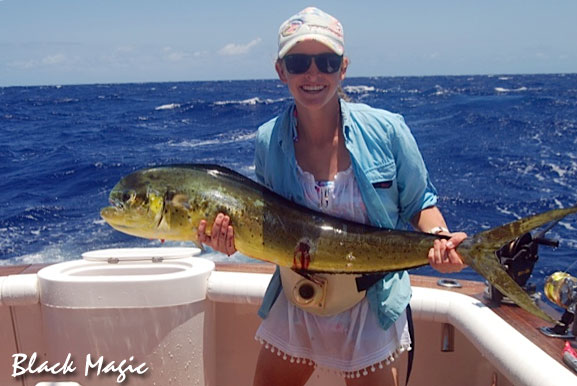 Michelle Moseley, fishing on Sea Nami, was named Ribbons Champion Senior Angler. Not only did Michelle tag a billfish early on Saturday morning, she also weighed the heaviest gamefish, a 17.6kg Spanish mackerel.

Champion Junior Angler went to young Lily Clements-Markham (photo above) who was fishing on board Black Magic skippered by Cameron Bartlett who were also winners of the Champion Boat award.  Black Magic finished the day with 1 marlin and 13 other gamefish (by my count) and I heard that Lily herself accounted for several dolphin fish and 1 cobia. Well done Lily!

Also fishing alongside Lily, Vitoria Bartlett (and with Tom Bartlett on deck making it a family affair) who was named Runner Up Champion Female, making up for this doomed dolly below with a 150lb black marlin later in the day. 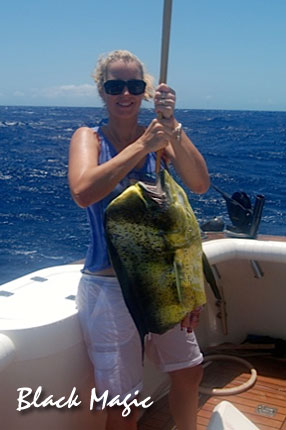 Another photo below from Runner Up Champion Boat Over 8m Chamois Free, skippered by Bill McLeod. Bill’s wife Maxine, tagged a black marlin at Flynn Reef.