SEQ: Capt. Ken Brown on Megumi fished the shelf east of Cape Moreton on New Year’s Day with one bite and conversion from a blue marlin. Brownie says that the fish was about 230lbs and was also angler Jamie Forster’s first billfish. Well done Jamie!

They also had 2 other bites from black marlin in the 100-150lb range that didn’t stay stuck.

Catch up report from Aaron Concord on his boat Mabuyu pre-Christmas with 2 blue marlin at 300lb and 500lbs. The first blue to Darren – his first blue and the seond to Aaron itself.  They also saw a big blue free feeding on the surface in 1000ms of water. Aaron said it was certainly the largest blue he has ever seen and in the 800-900 range at least (bring on the grander blue!)

Another catch up report from Matt Caelli and the crew on Jugs. Matt said they almost got a grand slam on heavy tackle on the 22nd with a black, stripy and missing the blue. They also followed up on Christmas Eve with a couple more blacks on the light tackle. Photo from Matt below.

Port Stephens: Matt Metcalfe fished Port Stephens on New Year’s Eve from his mate’s 4.5m poly with Ben and Dan for a 2-2-1 black that they estimated at 150lb. They also missed a stripe about the same size.

Matt says they were fishing on the green side of the current and there was a lot of bait about. 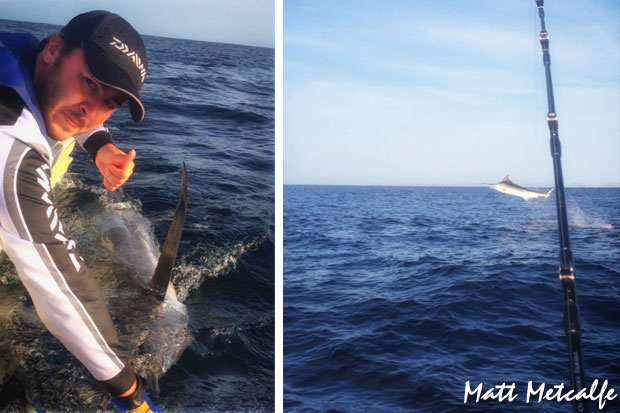 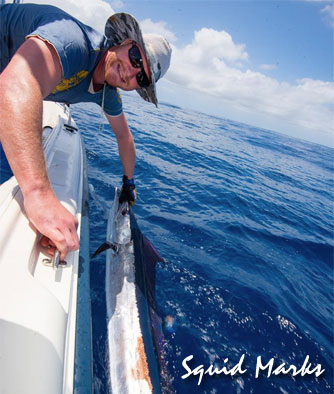 Meanwhile off Sydney, Colin McDonald on Squid Marks has notched up another spearfish. Colin says they they fished New Year’s Eve finding some super warm water in about 400 fathoms at 26.2 degrees.

They had a double hook up on spearfish jumped one off and released the other for Dave, which was his first gamefish!  Colins says the water looks great but the current is still racing south.

Quite an amazing run of spearfish down there with the very warm water having a lot to do with it no doubt! 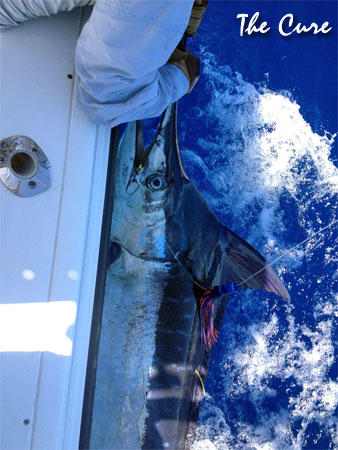 Northern NSW: Simon Fisher reports a 2-2-1 on his boat The Cure – both blue marlin with the fish they caught around the 300lb marlin while the one they lots was a lot bigger.

Simon says there is lots of life out there and they saw several other marlin that they just couldn’t switch and also picked up a bunch of dollies and a wahoo.

Sounds like its finally starting to fire there too!