Start fishing for the annual Gold Coast Light Tackle Masters was yesterday and it sounds like it’s off to a good start.  With 36 boats competing, there were 18 tags, most (all?) of which were the light tackle black marlin with Captain Ross McCubbin’s Lucky Strike among the leaders with 4 tags. Ross said that they went 4 from 6 including one fish about 50kg that they lost after a 2 hour fight on the 8kg! They also tagged a 80kg hammerhead and weighed a 21kg dolphin fish. I head of a few more boats not far behind on two tags as well.

The format again this year allows competing teams to pick their two best (from three) days so it will be very interesting to hear how the fishing pans out over the final two days.

Report from Vision Sportfishing’s Benjamin Currell at South West Rocks yesterday. Ben says they went 3-1-1 on blue marlin at Trial Bay Canyon and 4-3-1 on black marlin off the jail (once the weather turned bad). They found heaps of bait in close and a solunar bite period. Ben also heard a hot bite over radio in close on the morning tide change. Pic below – they are back out today! 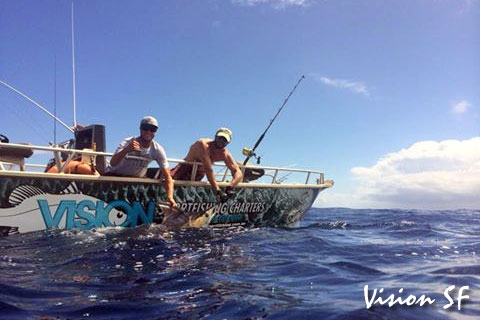